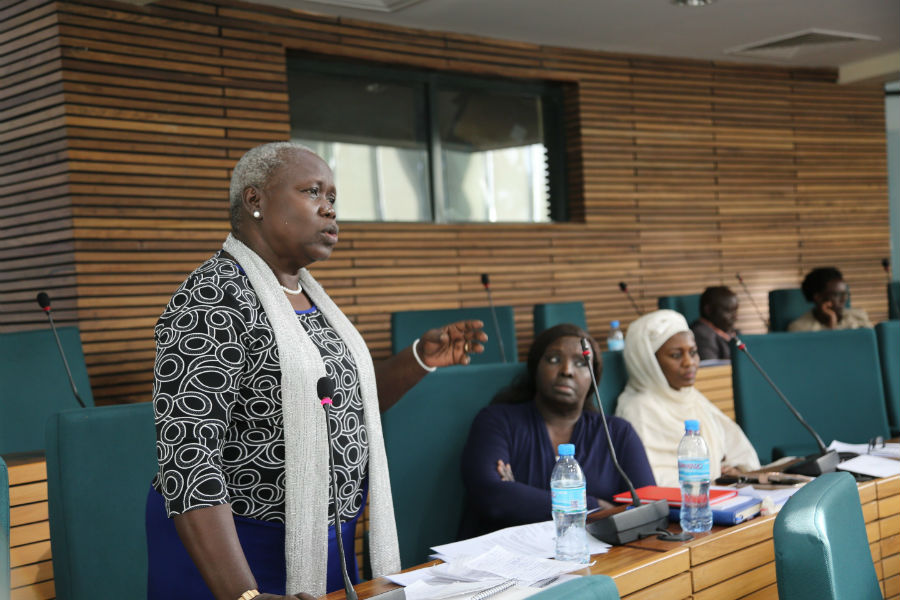 East African Legislative Assembly, Arusha, December 5th 2019: As the region puts out all its arsenal and explores modalities of containing the Ebola and Dengue viruses, the East African Legislative Assembly has stepped up to adopt the Report of the Committee on General Purpose on the oversight activity assessing levels of preparedness of Partner States in management of the epidemics.

The House in its debate has reiterated need for the Council of Ministers to develop an EAC Policy on the management of communicable diseases in the region and to strengthen collaborative engagement with key stakeholders. In effect, the Assembly wants further collaboration with stakeholders such as the World Health Organization (WHO) and the German Technical Co-operation (GiZ) to enhance oversight in the promotion of the health sector in the region.

The assessment took place in the Republics of Rwanda and Uganda, between September 12-16th, 2019, while the United Republic of Tanzania, requested for a new date for the exercise, according to a letter tabled in the House and confirmed by Deputy Minister for Foreign Affairs and EAC Co-operation, Hon Dr Damas Ndumbaro.  Chair of the Committee on General Purpose Committee, Hon Abdikadir Aden, presented the report to the House yesterday, affirming three other Partner States, (Republics of Burundi, Kenya and South Sudan) are also targeted in the next oversight activity. The report was tabled on October 3rd, 2019, during the 1st Meeting of the third Session held in Arusha.

The principal objective of conducting the oversight activity, was to assess the level of preparedness of the EAC Partner States in managing/containing the Ebola and Dengue fever epidemics and to explore possible sustainable interventions to combat these epidemics. The Committee took the initiative to get briefs on the Ebola and Dengue epidemics/pandemics and the progress made in controlling/managing the same; assessing challenges and ascertaining existence of any specific bilateral or international engagements/interventions to combat the epidemics.  The oversight activity further sought to establish the impact and effects of the said epidemics on the economies and welfare of the citizens of EAC.

Under Article 117 of the Treaty for the establishment of the East African Community, Partner States make a commitment to co-operate in, among others, health activities within the Community. Precisely, under Article 118(a) of the Treaty, Partner States undertake to joint action towards the prevention and control of communicable and non-communicable diseases and to control pandemics and epidemics of communicable and vector – borne diseases that might endanger the health and welfare of the residents of the Partner States and to co-operate in facilitating mass immunization and other public health Community campaigns.

During debate, Hon Pamela Maasaay lauded the initiatives of the Partner States, saying caution had been taken at the district levels by establishing laboratories including permeating such measures within the Communities by having surveillance modes in place.    “It is important for Communities to embrace strategies that ensure peculiar signals are picked up”, Hon Maasaay said.  Hon Kasamba Mathias lauded the efforts undertaken by the Republics of Rwanda and Uganda and said continued surveillance in the control of communicable and non-communicable diseases was vital.

“What we need now is a regional disease surveillance mechanism to enable us to be able to respond as a region”, he reiterated. Hon Oda Gasinzigwa said the exercise gave Members an opportunity to build their capacities on Ebola and called for behavior change on the part of the clinical officers. Hon Dr Anne Itto, supported the report and called for an urgent oversight activity in Republic of South Sudan, citing the conflict prone areas and the minimal presence of authorities in the border points between South Sudan and the Democratic Republic of Congo had made health infrastructure challenging. Other Members who contributed to the debate were Hon Dr Pierre Celestin Rwigema, Hon Dr Woda Jeremiah Odok, Hon Mary Mugyenyi and Hon Francoise Umuwukiza.  Others were Hon Kennedy Mukulia Ayason, Hon Dr Francois Xavier Kalinda, Hon Jean Marie Muhirwa, Hon Paul Musamali and Hon Eng Mohammed Mnyaa

The report further informs of various interventions undertaken by the Republic of Uganda and the Republic of Rwanda with regards to containing the disease. The House was informed of interventions made through a multi-sectoral approach and such include, development of a contingency plan for Ebola preparedness and response and a National Disaster Management Committee made up of Ministers in charge of emergency who advise and co-ordinate relief efforts in Rwanda.  In Uganda, the House heard of enhanced capacity building in surveillance and contact tracing and the effective use of community-based disease surveillance approach.

“Over 7 million have been screened at ground points of entry; with the Entebbe Airport recording screening of 225,804”, a section of the report states.

Prior to undertaking the oversight activity, the Committee according to Hon Aden, received a brief from the EAC Secretariat’s Health Department indicating that disease outbreaks were a common occurrence in the region and posed myriad of challenges.

“Each Partner State has had at least two notable disease outbreaks in every five-year period between 2000 and 2019”, Hon Aden said. Examples of outbreaks include Rift Valley Fever, Ebola, Marburg, Crimean Congo Hemorrhagic Fevers and Yellow Fever”, a section of the report said.

According to the Chairperson, it took Republic of Kenya and the United Republic of Tanzania, six months respectively to contain the 2006 Rift Valley Fever (RVF) outbreaks. The region and neighboring Democratic Republic of Congo have also experienced several outbreaks of the Ebola Virus Disease (EVD). “In January 2017, a Bird Flu outbreak was reported along the shores of Lutembe bay (Lake Victoria) in Uganda. In October 2017, a Marburg Fever outbreak was reported in Eastern Uganda, Kween district, close to the Kenyan border with one confirmed fatality”, the report added.

In his response, the Chair of the Council of Ministers, Hon Amb Olivier Nduhungirehe, assured the House all recommendations made would be implemented and affirmed that Secretariat was developing a regional policy on communicable and non-communicable diseases. “The Council will in due course interest the East African Science and Research Commission to champion research to enable the Community to fully benefit”, the Minister remarked.

The Ebola Virus Disease (EVD) is a severe and often deadly disease caused by an Ebola virus. It falls under the category of viral hemorrhagic fevers.  A person can get the disease by direct contact with body fluids of an infected person.

Signs and Symptoms of Ebola