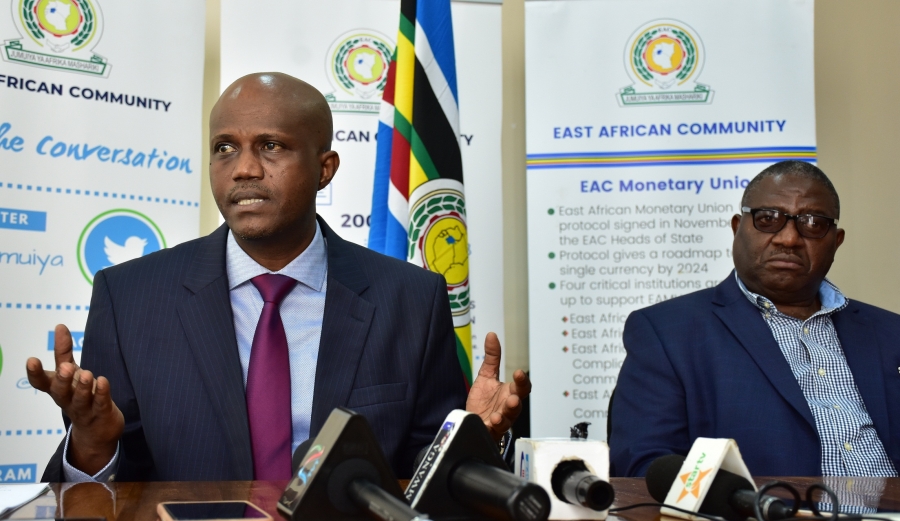 East African Community Headquarters, Arusha, Tanzania, 20th November, 2019: The 21st Ordinary Meeting of the EAC Heads of State Summit initially scheduled for Saturday, 30th November, 2019 has been postponed to a later date in either January or February next year.

EAC Secretary General Amb. Liberat Mfumukeko said Wednesday that the 21st Summit was postponed after a request by one of the Members of the Summit, adding that the postponement had nothing to do with a dispute or disagreement among any of the EAC Partner States.

Amb. Mfumukeko said that a new date for the 21st Summit meeting would be communicated later after consultations among the EAC Heads of State.

Amb. Mfumukeko, however, said that the 39th Meeting of the Council of Ministers slated for 21st to 27th November, 2019 would proceed as initially planned.

The Secretary General was addressing a media briefing at the EAC Headquarters where he among other things launched a Blood Donation Drive and unveiled the EAC 20th Anniversary Logo as part of activities to commemorate the Community’s two decades of existence.

The blood donation drive, which drew participation from EAC Staff and Members of Parliament from the East African Legislative Assembly, and was organized in collaboration with the Mt. Meru Hospital, Arusha, is part of the Community’s initiative to give back to the society by saving lives.

The Secretary General said that the overall objective of the EAC 20th Anniversary celebrations was to commemorate the achievements of the Community over the past 20 years.

“The celebrations are a joint undertaking by all EAC Organs, Institutions and Partner States’ Ministries responsible for EAC Affairs. The theme of the 20th Anniversary is EAC@20: Deepening Integration, Widening Cooperation,” he said.

Amb. Mfumukeko observed that the Community had expanded in the last 20 years, growing from the original three Partner States in 1999 to six today, with the Federal Republic of Somalia and the Democratic Republic of Congo having made applications to join the bloc.

He said the desire by other countries to join the six-member bloc was due to the achievements made by the Community over the years that have made it more attractive for investment and in the process raised the living standards of the people of East Africa.

“The increase in intra-regional trade can be attributed to the resolution of multiple Non-Tariff Barriers to trade by the Partner States and the establishment and operationalization of 13 One-Stop Border Posts to facilitate the cross-border movement of persons and goods,” he said.

“The implementation of the EAC Single Customs Territory has, for instance, resulted in drastic reduction in the period taken to clear goods from over 20 days to three (3) days on the Central Corridor and from 21 days to four (4) days on the Northern Corridor,” he added.

Under the Common Market, the Secretary General singled out the abolition of visa fees for EAC nationals traveling within the region, the ongoing issuance of the new internationally recognised East African e-Passport by all the Partner States except the Republic of South Sudan and the ongoing harmonisation of mobile calling and data charges within the region as some of the achievements of the Community.

“A total of US$271 million was set aside for the construction of the multinational 301 km Nyakanazi-Kasulu-Manyovu road in Tanzania and the 78 km Rumonge-Rutunga-Bujumbura road in Burundi,” said Amb. Mfumukeko.

“For Tanzania and Kenya, the Malindi-Mombasa-Lunga Lunga-Tanga-Bagamoyo road will be constructed at the cost of US$585 million,” he added.

On the East African Monetary Union, Amb. Mfumukeko disclosed that EAC Partner States were in the process of harmonizing critical policies and establishing the necessary institutions to ensure the realisation of a single currency for the entire region by the year 2024.

“Plans are at an advanced stage to put in place the East African Statistics Bureau, one of the four institutions required to make the Monetary Union a reality,” said Amb. Mfumukeko, adding that recruitment was already underway for staff who will run the Bureau.

“President Yoweri Museveni of Uganda on Monday, 18th November, 2019 launched the National Stakeholder Consultations for Drafting the Constitution of the Confederation,” he said, adding that the constitution-making process would be as consultative as possible with no Partner State being forced into the Confederation against their will.

He said that the envisaged Federation would boost the region’s profile politically, economically and militarily thereby guaranteeing national security of all the Partner States besides enabling them to negotiate better deals on the proceeds from exploitation of their natural resources versus the more developed countries.