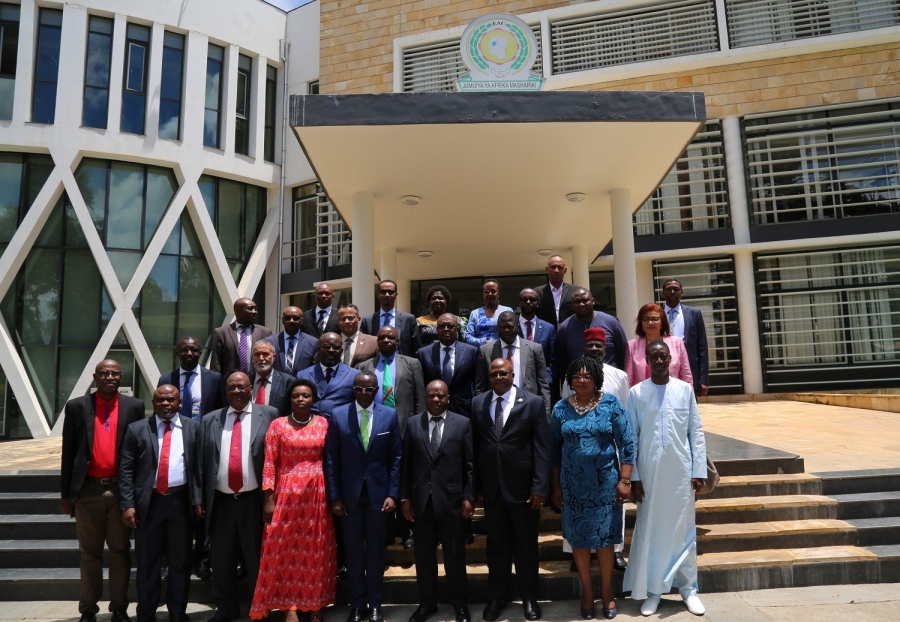 EALA Speaker meets Speaker of the Parliament of Tanzania

East African Legislative Assembly: Arusha, Tanzania, October 29th, 2019: EALA Speaker, Rt Hon Ngoga K. Martin and the Speaker of the Parliament of Tanzania, Rt Hon Job Yustino Ndugai, are emphatic that the integration process must stay on course for the betterment of the citizens of the EAC.  The Speakers have rallied for the full implementation of the pillars of integration including the Monetary Union to spur economic stability.

EALA Speaker, Rt Hon Ngoga Karoli Martin yesterday received the Speaker of the Parliament of Tanzania, Rt Hon Job Yustino Ndugai, who paid him a courtesy call at his Chamber in Arusha.

"EAC looks forward to fully implementing the Monetary Union Protocol and the eventual entry of the Common Currency.  EALA has passed two key pieces of legislation supporting establishment of related institutions" the EALA Speaker said.  Speaker Ngoga cited the legislation as the East African Monetary Institute Bill, 2018 and the EAC Statistics Bill, 2017, both of which, he termed as progressive legislation in the search for the region’s common currency.

Rt Hon Ngoga lauded the warm and cordial relations existing between the two Houses, which he said was beneficial for the integration process.  “Under your leadership, we have enjoyed fruitful collaborative arrangements including meeting in your Chambers in Dodoma as part of our rotational sittings, and I am grateful to you, Mr Speaker”, Rt Hon Ngoga told the visiting Speaker.

The Speaker of EALA said EALA was committed to its mandate. "EALA has been deliberate in strengthening its Oversight mandate as provided for in the EAC Treaty. We are also working closely with EAC Ministers in enhancing our legislative work" he told Rt Hon Ndugai.

On his part, Rt. Hon Ndugai asserted that Parliament of Tanzania would continue to be at the forefront in championing for the rights of the citizens of the region to enjoy the fruits of integration.  “We often receive your output and such are passed through our relevant Committee in our Parliament”, the Speaker said.  He said the region needed to arrive at stronger integration, calling for embrace of the monetary union that would lead to a common currency for the region.   “Currently if you want to visit Rwanda, Burundi, Kenya, Uganda or even Burundi from here, you need to change your money in to their respective currencies. The same applies to visitors coming to Tanzania from the said countries. We should speedily embrace the Monetary Union, whose common currency would stipulate stability and with a stable exchange rate in the region”, Rt Hon Ndugai asserted.

The Speakers later addressed and welcomed Members of the Pan-African Parliament (PAP), who are in Arusha on a study visit on model formulation of laws.

Under Articles 48 and 65, the EALA and National Assembly liaise closely on matters pertaining to the East African Community.