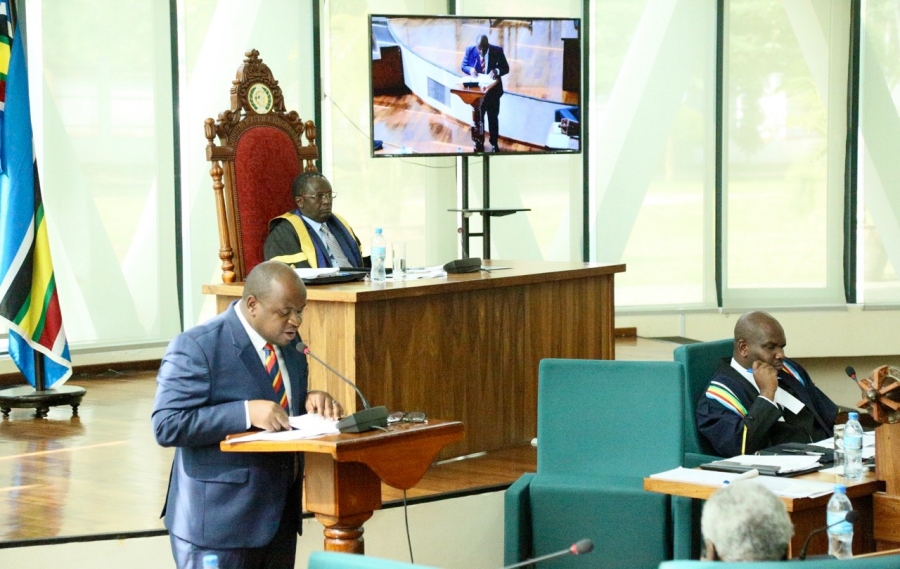 East African Legislative Assembly, Arusha, October 3rd 2019: A report of the Assembly has lamented over the declining forest cover in the EAC region, while calling for remedial measures to address factors hindering on the future sustainability of the Lake Victoria Basin.  Consequently, the regional Assembly while adopting the Committee’s report on Oversight activity of the Lake Victoria Basin Commission (LVBC) undertaken in Kisumu, Kenya, wants measures in place to enhance productivity of Lake Victoria, enhance fish stocks and vigorous tree planting campaigns, targeting 20 million trees annually.

Chair of the Committee on Accounts, Dr Ngwaru Maghembe, told an attentive House late yesterday that if remedial measures are not taken, Lake Victoria risks being extinct in the next 123 Years.  Hon Dr Maghembe further called for the assent of the EAC Forests Management and Protection Bill, 2015, to put in place, a regulatory framework for conserving and protecting forests across the EAC.

On funding of the LVBC programs, the Assembly reiterated the need for increased resources including development of a resource mobilization exercise to ensure sustainability.   Also proposed is the need to institutionalize proper mechanisms to enable the Assembly receive periodic reports on the status of implementation of its recommendations from the Council of Ministers.   This aspect, the Assembly reiterates, shall address capacity of LVBC to uptake the recommendations of the EAC Audit Commission and EALA.  The report brings to fore a number of challenges including lack of mid-year and annual results review of the Financial year 2015/16, lack of regular updating of the fixed asset register as well as delayed write-off and disposal plant, property and equipment.

The raft of recommendations follows an oversight activity of the LVBC in Kisumu, Kenya, undertaken by the Committee on Accounts on September 5-8, 2019.   The regional Assembly says the LVBC is a source of water for domestic and industrial use catering for about 87 cities and towns, with a 60% coverage, a rich fishery resource yielding more than 1 million Metric Tonnes of fish, providing annual forex pegged at USD 250 Million and an ecosystem function supporting biodiversity and terrestrial and aquatic systems approximating 4,000kms.

The objectives of the three-day meeting were to assess the governance and management systems of LVBC; ii) to monitor the performance of Programs and Projects at LVBC; and iii) to evaluate the Progress on issues previously raised by the Audit Commission in its report for the year ended 30th June 2016.

Debating on the report, Hon Pamela Maasaay cited infrastructure development as a major challenge saying there were a number of initiatives been undertaken towards support for water protection at the basin.  “However, more comprehensive initiatives should be undertaken Mr Speaker. Environmental degradation and water pollution are part of the challenges of climate change and these need collaboration with various stakeholders to address”, the legislator said.

On his part, Hon Simon Mbugua, said the Government of Kenya had committed to the LVBC and the EAC integration process by availing land to enable its expansion.  The legislator further hailed the oversight activity at the LVBC as timely and said it was important for EALA to enhance its oversight activities in the region.

Others who supported the report were Hon Kasamba Mathias, Hon Francoise Umuwukiza, Hon Pierre Celestin Rwigema and Hon Adam Kimbisa.The Chair of Council of Ministers, Hon Olivier Nduhungirehe said the EAC was committed to conservation issues at the LVBC and the EAC in general.