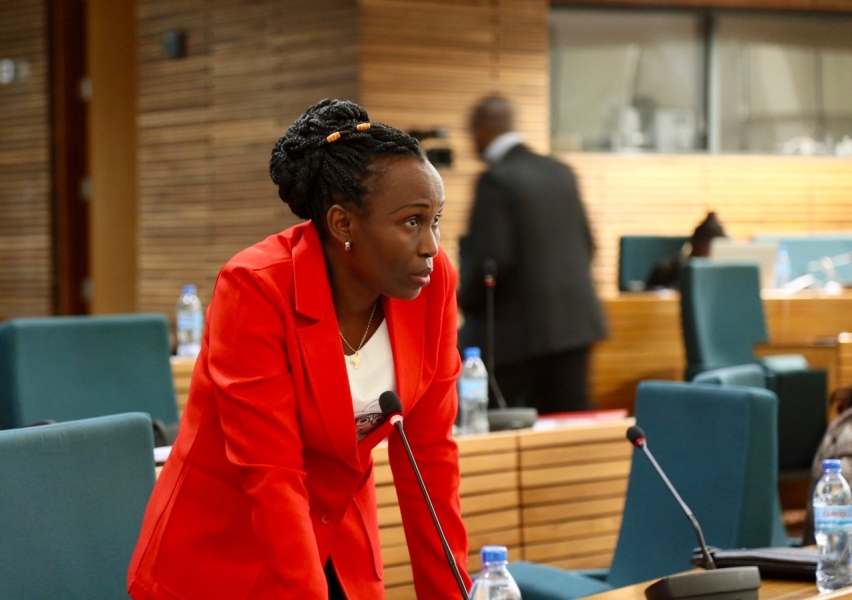 East African Legislative Assembly, Arusha, October 1st 2019: The delay of the region to institute the Trade Remedies Committee and amend a critical article of the Protocol of the Customs Union is negatively affecting the business community, prolonging resolution of trade disputes and impacting on intra EAC trade, a report of the regional Assembly has said.

EALA has thus affirmed the need for the Partner States to speedily amend the said Article 24 (2) (a), whose ratification has taken a decade and for the same instrument to be deposited with the Secretary General by February 2020.

The regional Assembly also wants the Council of Ministers to operationalize the Committee on Trade Remedies by April 2020, saying any further delays were jeopardizing the integration process. In effect, the House is similarly recommending for sanctions against any Partner States that will not meet the set dates.

According to the Chairperson, the Trade Remedies Committee which is to be constituted of members, qualified and competent in matters of trade, customs and law, was anticipated as a body designate to investigate on disputes  in the industry, recommend measures to prevent injury and to ensure timely fulfilment of all requirements by parties to the dispute, while providing advice as may be necessary.

According to the Customs Union Protocol, the Trade Remedies Committee is to handle matters dealing with rules of origin, ensure regulations on anti-dumping measures provided for are adhered to and that of safeguard measures.  The Committee is also expected to look in to the subsidies and countervailing measures.

According to the EAC Trade and Investment Report 2016, intra- EAC exports declined from US$3.2 billion in 2015 to US$2.6 billion in 2016 representing 17.4% due to an inadequate trading regime which restricts the export of certain commodities to Partner States. Lack of product diversification and existence of Non-Tariff Barriers in the region have continued to affect intra-regional trade among other factors.

The House was informed that at its 10th Ordinary meeting of the EAC Heads of State Summit, the Summit of EAC Heads of State approved the amendment of Article 24 (2) (a) of the Protocol of the EAC Customs Union.  The amendment removed the word “nine” from paragraph 2(a) of that article in effect, causing the Committee’s Membership to be open-ended.

The Report observes that while there are some initiatives undertaken by the relevant EAC organs, the Partner States were yet to ratify the amendment of Article 24 (2) (a) of the Protocol.

At its sitting of 27th February 2016, convened in Arusha, Tanzania, the Sectoral Council of Trade, Industry, Finance and Investment, among others, directed Partner States to deposit with the Secretary General instruments of ratification of the amended Article 24(2)(a) of the Protocol on the Establishment of the East African Customs Union by 15th August 2016.

While acting on behalf of the Secretary General, in his letter dated 23rd August 2017, the Director General, Customs and Trade, Mr. Kenneth Bagamuhunda reminded all the Partner States about the above directive of the Sectoral Council of Trade, Industry, Finance and Investment and the need to deposit instruments of ratification of the amended Article 24(2)(a) of the Protocol on the Establishment of the East African Customs Union by 30th October 2017.

The report however mentions of indifference by the Partner States with regards to amendment of the Article 24 (2) (a) of the Protocol of EAC Customs Union. While the Partner States confirmed receipt of the various letters requesting them to expedite the process of ratification, no action had been taken at the time of carrying out this activity, with the exception of the Republics of Burundi and Kenya.

The Republic of Burundi informed the Committee that the amended provision of the Protocol was before the National Assembly for consideration. In his letter to the Clerk of EALA dated 17th September 2019, the Principal Secretary, Ministry of East African Community and Regional Development informed the Committee that the matter was before the Kenya National Assembly awaiting approval.

Given the fact that Committee on Trade Remedies is supposed to handle any matters pertaining to Rules of Origin, Anti-Dumping Measurers, Subsidies and Countervailing Measures; Safeguard Measures; and Dispute Settlement Mechanism further delay will impact negatively the business community and traders as there is no dedicated Committee to handle these matters which have bearing impact on businesses, the Chairperson of the Committee informed the House.

At debate time, Hon Eng. Mohammed Mnyaa termed the delay unfortunate but occasioned by several scenarios.  “In 2007 when Rwanda and Burundi joined the Community, there was need to amend the Protocol and that was a genuine reason not to be formed.  What is the rationale for the delay beyond 2009 up to date, given the Summit of EAC Heads of State had approved the amendment yet, no ratification was done? The legislator posed. “Such experience should not be repeated in future,” he said.

Hon Marie Claire Burukikiye termed the oversight activity as good for advocacy and said the delay to ratify the amendment by Partner States ten years later was regrettable.

Hon Simon Mbugua called for formation of an implementation committee to monitor and provide information on the status of Protocols that are not signed, ratified by Partner States and provide the attendant reasons. “The matters of overlaps with the national laws should be revisited”, the legislator said.

Hon Dr Abdulla Makame said the existence of the Committee was now long overdue. He said it was important for the Trade and Remedies Committee to be fully expedited in the shortest time possible.

Hon Rose Akol called for the pairing of Committees between EALA and the National Parliaments to ensure gaps that occur and delays in Partner States are picked up by the respective Committees and the issues are followed up.

Hon Dr Woda Jeremiah informed the House that authorities in South Sudan had promised to ratify the amended Protocol but called for expedited follow-up.  Communication between EALA and the National Parliaments should be enhanced to ensure flow

The Minister of Burundi, Hon Isabelle Ndahayo informed the House that Parliament of Burundi had already approved the ratification of the amendment and that soon it would be completed.

The Chair of the EAC Council of Ministers, Hon Olivier Nduhungirehe, informed the House of the commitment of Council to ensure the Trade Remedies Committee is realized within the stipulated deadline, which he termed reasonable.  I assure the House that Council of Ministers will follow-up the matter of the Trade Remedies Committee with the Sectoral Council of Trade, Finance and Investment and give it all the due attention. The Minister stated that an online Non-Tariff Barriers (NTB) reporting format had similarly been established to Fastrack efforts to address NTBs.