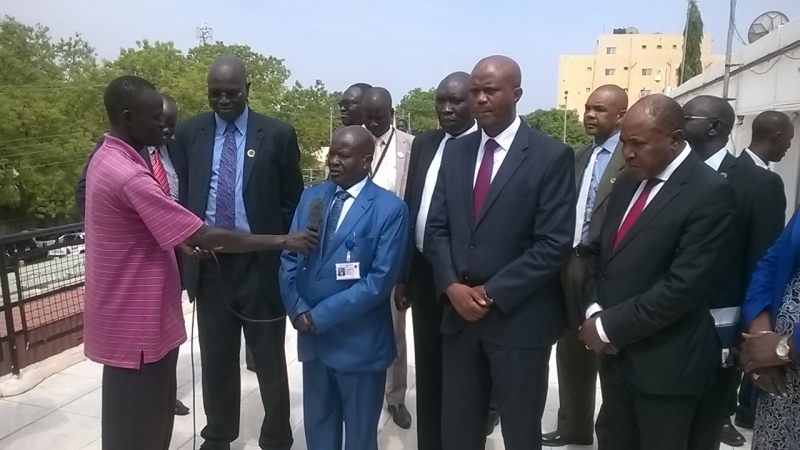 East African Community Secretariat; Arusha, Tanzania; 17 March 2017:
The Republic of South Sudan (RSS) will soon appoint a judge to sit on the bench of the First Instance Division of the Arusha-based East African Court of Justice (EACJ).

EACJ judges are usually appointed by the East African Community Heads of State Summit on the recommendation of Partner States.The RSS Judiciary will also provide office space for the Arusha-based court to establish a sub-registry like is the case in the capital cities of the other EAC Partner States

RSS will later appoint a Judge to the Appellate Division of the EACJ once the relevant law is amended to raise the number of judges from five to six.

These were some of the issues agreed on during discussions between the RSS Chief Justice, Hon. Chan Reec Madut, and an EAC delegation led by the Secretary General, Amb. Liberat Mfumukeko in Juba, South Sudan.

The EAC delegation informed the Chief Justice that all relevant legal instruments will be amended to accommodate the RSS which joined the Community in September last year.

The EACJ is the judicial arm of the Community. The Court’s jurisdiction is limited to the interpretation of the Treaty for the Establishment of the EAC.

At a meeting later with the RSS Presidential Advisor on Economic Affairs, Hon. Aggrey Tisa Sabuni, the EAC delegation was informed that the RSS National Legislative Assembly had elected nine (9) Members of Parliament who would represent the country at the East African Legislative Assembly (EALA).

The nine MPs will join their EALA counterparts from the republics of Burundi, Kenya, Rwanda, Uganda and the United Republic of Tanzania in making laws for the Community.

Hon. Sabuni informed Amb. Mfumukeko that the legislators were drawn from the ruling Sudan People’s Liberation Army and other political parties in the RSS.

At another meeting with the Governor of the Bank of South Sudan, Hon. Othom Ra go Ajak, the delegation disclosed that the implementation of the East African Monetary Union Protocol was well underway.

The East African Monetary Institute is a transitional mechanism to the East African Central Bank which will issue the single currency for the region which is expected to be in place by the year 2024.

The East African Statistics Institute on the other hand is critical for macro-economic convergence and harmonisation as it will provide accurate data and information to guide decision making as the region progresses towards a single currency.

It was noted that the Monetary Union would only function efficiently if the Customs Union and Common Market protocols were fully implemented.

In his remarks, Hon. Ajak informed the EAC delegation that the Bank of South Sudan was already working closely with the other Central Banks of East Africa, adding that the bank will fully participate in EAC activities especially the Sectoral Committee on Finance and Economic Policy.