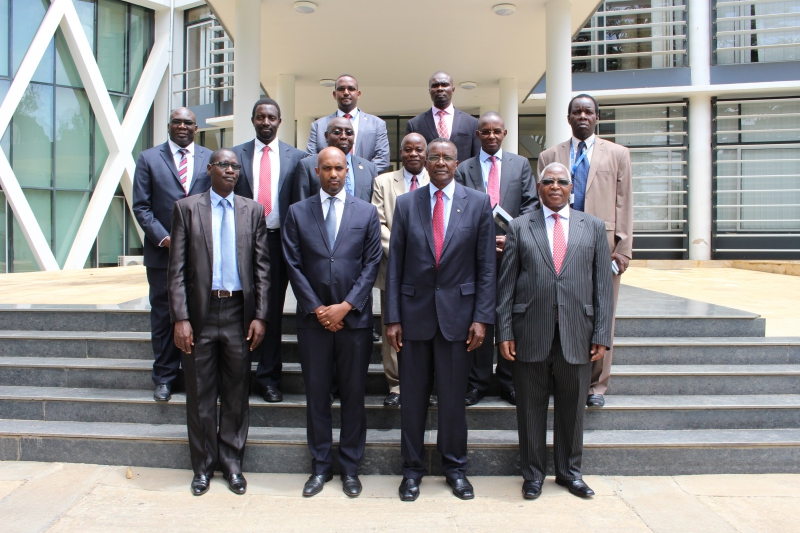 The Chief Justice and President of the Supreme Court of the Republic of Kenya yesterday visited the Court to study the operation of the Case Management and Recording System (CMRS). His Lordship, Justice David Maraga appreciated the invitation by the EACJ President Justice Emmanuel Ugirashebuja to visit the Court and especially to learn and know how the Regional Court is becoming a digital and paperless Court.

Chief Justice Maraga commended the technology advancement of the EACJ which he observed will increase the efficiency in the judiciary thus rendering justice timely and reducing the backlog of cases. He noted that the Judiciary of Kenya have been trying to introduce the same but has not yet reached to the level required and that with experience from EACJ, they will be able to introduce the similar system too.

His Lordship Justice Geoffrey Kiryabwire, Judge of the Appellate Division who heads the EACJ Information Technology Committee, presented a rich and detailed paper on the establishment and operations of the case management and recording system at the EACJ as well as in his National Court that is the Court of Appeal of the Republic of Uganda where he also serves as a Judge.

Justice Kiryabwire thanked the Chief Justice for having thought about benchmarking with the EACJ on how CMRS works. He also explained the importance of CMRS as an enabler for an efficient and faster running the Court businesses. Justice Kiryabwire said that the case management and recording  system through electronic filing system addresses the common mistakes of litigants files going missing in the Registries, hence promotes transparency and safety record keeping. He also added that the system supports recording and transcription of proceedings which have replaced handwritten practices that are time consuming and increases paper work.

His Lordship further stated that, the system improves good public perception of the Court and is cost effective because it cuts costs of transporting pleadings from Partner States. That, it is a user friendly system and easy to understand and navigate. Justice Kiryabwire further recommended that, CMRS requires training of the stakeholders and continuous practice until they are used to it. He also pointed  that, for any ICT system in a judiciary to be effective, it needs the following; a vision bearer/ good leadership, attitude change from analog to digital thinking, investment cost, functional / motivated ICT department and staff, working with the Bar and incorporation of the use of ICT in Rules of procedure/ ICT Policy.

In his conclusion Justice Kiryabwire said that, in EACJ the system is not yet open to the Lawyers as modalities are still being put in place for this. Electronic filing can however be done at the Court Sub-registries in the Member States.

The Chief was accompanied by Hon. Justice Stephen Kairu of the Court of Appeal of Kenya and other senior officials from the Judiciary, while the EACJ President with the Judges of the Appellate Division, Registrar of the Court Hon. Yufnalis Okubo and other staff of the Court.

The case management system developed as an engine to facilitate the court’s procedures and processes. The system currently can perform the processes of the court from first to last stage as expected. Custom built in alignment to the court’s rules of procedure, the system runs just as the traditional processes would. It documents, records and audits each stage of the case in the Court. Developed with the capability of e-filing, this system in the future will give stakeholders capabilities to interact with the court system and file cases at their desks from any location.

Provided by Jefferson’s Audio and Visio systems (JAVS), and responsible for video and audio court recording, JAVS has fitted the court with both a software and hardware outfit that makes it possible for the court to record its sessions as they proceed and also give the capabilities to live stream sessions as they are going on. This system also built in integration with the case management system to have the cases synchronized with their respective MPEG sessions for reference reasons. This marriage between these systems propels the court to a world class court pushing the boundaries the court to a world class technological platform.

The system was launched by the EAC Heads of State on 30th April 2014 at the Extra-Ordinary Summit of the East African Community in Arusha, Tanzania.

The East African Court of Justice (EACJ or ‘the Court’), is one of the organs of the East African Community established under Article 9 of the Treaty for the Establishment of the East African Community. Established in November 2001, the Court’s major responsibility is to ensure the adherence to law in the interpretation and application of and compliance with the EAC Treaty. Arusha is the temporary seat of the Court until the Summit determines its permanent seat. The Court’s sub-registries are located in the respective National Courts in the Partner States.