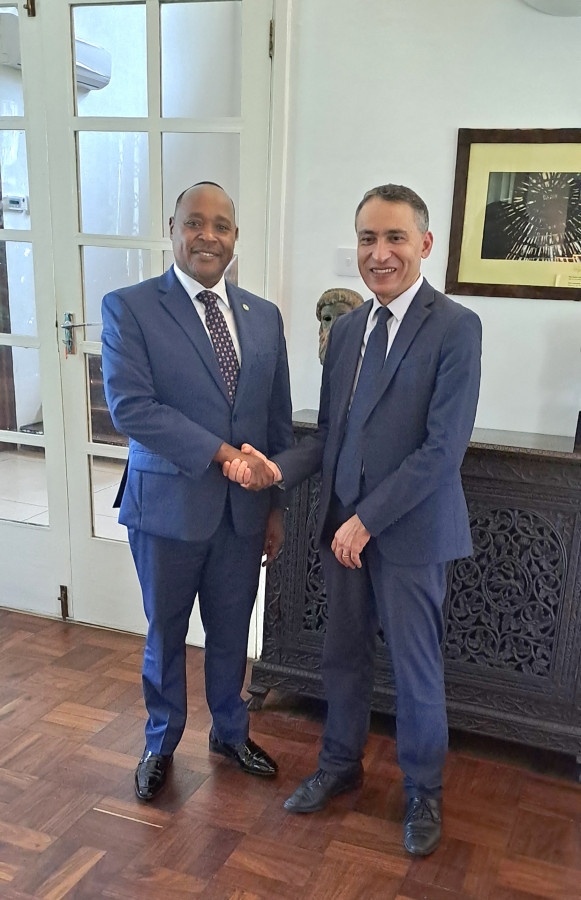 H.E. Hahjlaoui made the disclosure when he met with the Secretary General of the EAC, Hon. (Dr.) Peter Mathuki, who paid a courtesy call on him at his residence in Dar es Salaam, Tanzania.

Amb. Hahjlaoui reiterated his country’s commitment to use its experience and help in any way necessary to bring peace back in Eastern DRC.

“It is high time now that all stakeholders involved in the peace-making process in Eastern DRC look at the big picture and put the interest of DRC people first rather than their own,” said the French Ambassador.

He acknowledged the efforts of EAC Partner States in restoring security in DRC as huge and cannot be questioned; therefore, he said his country was prepared to provide support towards peaceful resolution of the war in Eastern DRC.

“We are ready to join hands with EAC Partner States in finding solutions of ongoing conflicts in Eastern DRC,” said Amb. Hahlauoui.

Meanwhile, the French envoy reiterated his country’s commitment to support the implementation of the EAC Summit directive to include French as a language of the Community in addition to English and Kiswahili.

The envoy said his country was more than willing to assist the EAC technically and financially in the operationalisation of French as one of the official languages of the EAC.

On his part, Dr. Mathuki hailed France her continued support to EAC programmes and projects, adding that EAC needed all assistance as it seeks to resolve the ongoing conflicts in Eastern DRC.

“Let me take this opportunity to thank the people and government of France through you your Excellency for the continued support on different issues of the EAC integration ” DRC is part of the community helping them is not an option rather a right thing to do’’, added Hon Mathuki.

The Secretary General informed the Ambassador that region through the Summit of EAC Heads of States is determine to restore peaceful environment in Eastern DRC. A peaceful DRC is key to the development of our region, added Hon Mathuki.

On the support to include French as official language of the Community, Dr Mathuki said the assistance comes at a time when the Community was continuing to deepen its ties with the other French-speaking blocs.

The Secretary General and his counterpart agreed to form a small committee to work on modalities of how the French Government can help to resolve some of the requirements including buying translations infrastructure at the EAC Secretariat and capacity building to the staff.

The Secretary General visited the French Ambassador to discuss priority areas at the EAC that could be supported by France and how to enhance the existing relations between EAC and France.