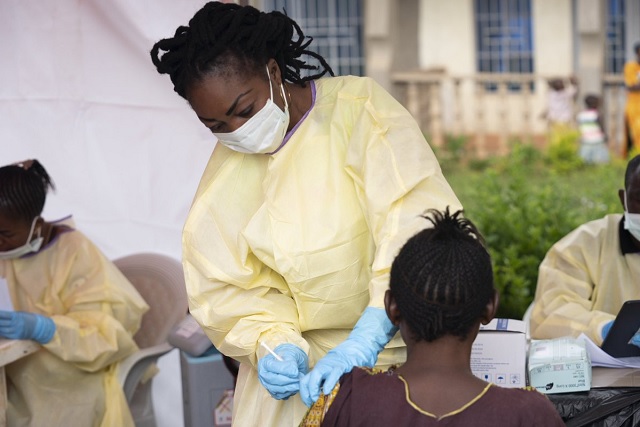 Health authorities in Uganda have declared an outbreak of Ebola after a case of the Sudan ebolavirus was confirmed in Mubende District in the Central part of the country. As at 24th September, 2022, there were four confirmed deaths and a total of 34 EVD case patients, 16 of which are confirmed.

“I urge Partner States to enhance surveillance and laboratory testing especially at border areas; to implement appropriate infection prevention and control measures and increase risk communication and community awareness of the disease. Further, I ask Partner States to consider the deployment of the EAC mobile laboratories to the strategic outbreak hotspots and at the various border Point of Entries. This shall enhance screening of the suspected cases as these mobile laboratories have the capabilities to handle such level 3 and 4 pathogens,” says the EAC Counsel to the Community (CTC) and Acting Deputy Secretary General for Productive and Social Sectors, Dr Anthony Kafumbe.

Dr. Kafumbe said that the Secretariat would work with Partner States to coordinate emergency preparedness and response activities across the region.

There have been seven previous outbreaks of the Sudan ebolavirus, with four occurring in Uganda and three in Sudan. Uganda last reported an outbreak of Sudan ebolavirus in 2012. In 2019, the country experienced an outbreak of Zaire ebolavirus, crossing from the North-Eastern Region of the neighbouring Democratic Republic of the Congo. In addition to the trained technical experts, the deployment of the EAC Mobile Laboratories to Kisoro also played an important role in the rapid response in Uganda.

The World Health Organization (WHO) has expressed optimism in Uganda’s ability to tackle the epidemic and is helping Ugandan health authorities with the investigation and deploying Staff to the affected area.

“Uganda is no stranger to effective Ebola control. Thanks to its expertise, action has been taken quickly to detect the virus and we can bank on this knowledge to halt the spread of infections,” said Dr Matshidiso Moeti, the WHO Regional Director for Africa.

Ebola is a severe, often fatal illness affecting humans and other primates. The virus is transmitted to people from wild animals and spreads in the human population through human-to-human transmission via direct contact (through broken skin or mucous membranes) with blood or body fluids of a person who is sick with or has died from Ebola, and objects that have been contaminated with body fluids like blood, fa​eces and vomit from a person sick with Ebola or the body of a person who died from Ebola. The average EVD case fatality rate is around 50 percent. However, case fatality rates have varied from 25 percent to 90 percent in past outbreaks. Ebola has six different species, three of which (Bundibugyo, Sudan and Zaire) have previously caused large outbreaks.

The incubation period, that is, the time interval from infection with the virus to onset of symptoms, is from 2 to 21 days. A person infected with Ebola cannot spread the disease until they develop symptoms. Symptoms of EVD can be sudden and include fever, fatigue, muscle pain, headache, and sore throat followed by vomiting, diarrhoea, rash and in some cases, both internal and external bleeding.

Early initiation of supportive treatment has been shown to significantly reduce deaths from Ebola - rehydration with oral or intravenous fluids and treatment of specific symptoms improves survival. A range of potential treatments including blood products, immune therapies and drug therapies are currently being evaluated.

While ring vaccination of high-risk people with Ervebo (rVSV-ZEBOV) vaccine has been highly effective in controlling the spread of Ebola in recent outbreaks in the Democratic Republic of the Congo and elsewhere, this vaccine has only been approved to protect against the Zaire virus. Another vaccine produced by Johnson and Johnson may be effective but has yet to be specifically tested against Ebola Sudan.