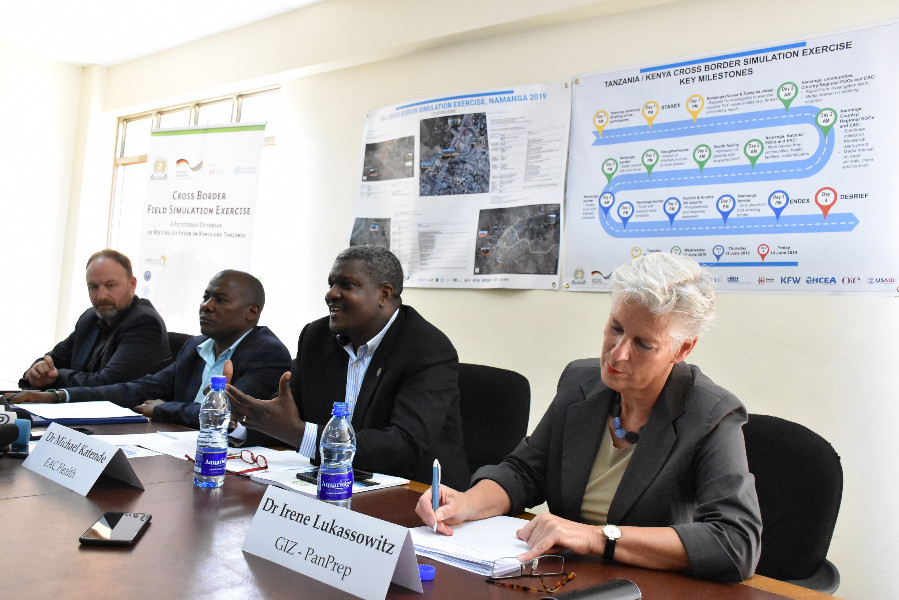 East African Community Headquarters, Arusha, 21st May, 2019: The East African Community (EAC) Secretariat will convene a cross border field simulation exercise (FSX) at the Namanga border between the Republic of Kenya and the United Republic of Tanzania from 11th to 14th June 2019 as directed by the EAC Sectoral Council of Ministers of Health in 2015. The FSX aims to enhance the status of preparedness for and response to infectious disease outbreaks in the EAC, thereby making the region safe for the people and businesses in the region. While the majority of the estimated 250 participants will come from the two Partner States, stakeholders from the Republics of Burundi, Rwanda, South Sudan and Uganda and representatives from regional, supra-regional and international institutions and organisations will also participate. Not all the participants will be at Namanga, but work from their usual work places in Dar Es Salaam and Dodoma, Arusha and Nairobi, Longido, Kajiado and in the border area. Only the EAC Secretariat will have its operations centre at the One Stop Border Post (OSBP).

Seventy-five percent of infectious diseases are transmitted between animals and humans. Outbreaks affect agriculture, trade and tourism and the lives and livelihoods of the people. Involving these sectors in prevention, response and mitigation reflects what is called the “One Health” disease management approach. The EAC region has experienced cases of Ebola, Rift Valley, Marburg and Crimean Congo Hemorrhagic fevers, Cholera, Polio and Plague among others. The current Ebola Virus Disease outbreak in the Democratic Republic of Congo, which has so far caused over 1,600 human cases and more than 1,000 deaths, remains a major threat to the health and socio-economic wellbeing of the people of East Africa. Therefore, the region needs to be prepared and the ongoing efforts to operationalize national and regional contingency plans need to be strengthened. In this regard, the planned cross-border Field Simulation Exercise aims to strengthen the capacities of all people involved in preventing and responding to infectious disease outbreaks across different professions and sectors of society.

An FSX is an interactive instrument to evaluate the status of preparedness for and response to disease outbreaks of organisations or other entities in the EAC region. It simulates a situation under real conditions which could occur at any time. The FSX allows participants to identify strengths and weaknesses and can facilitate practical corrective actions at all levels. It will be used to assess coordination and collaboration mechanisms, emergency response deployment, logistics and administrative processes, risk and crisis communication as well as emergency management and leadership. Findings from the FSX will be used to further improve preparedness and response capacities in the EAC region and beyond.

The scenario of the exercise will mimic a cross border disease outbreak, aggravated by environmental factors and with impact on humans and animals, agriculture, trade and tourism, and the economy as a whole. Early warning, infections and deaths in animals and human beings will prompt the reporting and activation of national and regional preparedness and response mechanisms emphasising the importance of the One Health approach and of appropriate risk and crisis communication as well as cross border collaboration.

Based on the recent need to prepare EAC Partner States for Ebola due to the current outbreak in DRC, the fictitious component will feature a virus that will mutate into a pathogen that can be transmitted between humans causing severe fever and bleeding resulting in increased numbers of cases and deaths. This will help in assessing and building EAC Secretariat’s and Partner States’ capacities to prepare and respond to an Ebola-like situation.

With this press release, the EAC Secretariat informs the public and especially the communities in the border area about the exercise. Around Namanga, selected health facilities, slaughter houses and farms on both sides of the border, military and police, the media and last but not least the public will participate in the FSX. The main focus will be on the One Stop Border Post as the main crossing point for people and goods between the two countries.

Preparations for the Field Simulation Exercise are already ongoing and will be in full swing between 8th and 11th June 2019, ahead of the expected start of the FSX on 11th June 2019.

The exercise is planned and organized in a way that ensures minimal disruption of normal activities traffic at the OSPB and other simulation sites. All sites will be well marked and passengers will be informed about the exercise so that passers-by will know what is going on, when they see the military, ambulances and people in protective gear and can thus behave accordingly and contribute to the success of the exercise.

The cross-border field simulation exercise is supported by the “Support to Pandemic Preparedness in the EAC Region” project, which the Deutsche Gesellschaft für Internationale Zusammenarbeit (GIZ) GmbH implements on behalf of the German Government and the EAC. The World Health Organization is providing technical support throughout the planning and implementation of FSX in line with its mandate of implementing the International Health Regulations globally.