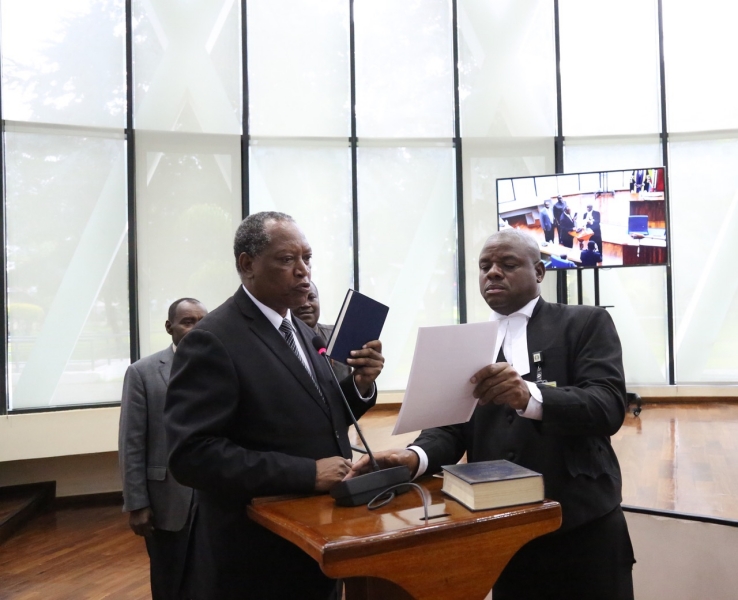 Hon Prof Kabudi was sworn in by the Clerk to the Assembly at a brief ceremony witnessed by the Speaker and Members of EALA in line with the Rule 5 of the Rules and Procedures of the Assembly. The Rule 5(4) of the Rules of Procedure says in part that: “No Member can sit or participate in the proceedings of the House until the Oath or Affirmation of Allegiance to the Treaty is taken”.

Rule 5(5) specifically states that “when a Member first attends to take his or her seat other than at the first Sitting of a new House, he or she shall be brought to the table by two Members and presented by them to the Speaker who shall then administer the Oath or Affirmation of Allegiance”.

Hon Dr Kabudi was appointed to the Ministry by H.E. John Pombe Joseph Magufuli in March 2019, replacing Hon Dr Augustine Mahiga who moved to the docket of the Constitutional and Legal Affairs Ministry. Professor Kabudi is deputized at the Ministry of Foreign Affairs and East African Co-operation by Hon Dr Damas Ndumbaro.

Prior to the appointment as Minister for Foreign Affairs and East African Co-operation, Hon. Prof. Kabudi was the Minister for Constitutional and Legal Affairs from March 2017 to March 3, 2019. Prior to joining cabinet, Hon Prof. Kabudi was a Professor of Law at the University of Dar es Salaam with a wide-ranging academic expertise and long experience in public service and consultancy.

At the University of Dar es Salaam, he served as Dean of the Faculty of Law after having served as Associate Dean and Head of Department of International Law. At different intervals during his academic career, Prof. Kabudi was seconded to the Government as National Coordinator in the Vice President’s Office for review of institutional framework for environmental management in Tanzania and the drafting of the Environmental Management Act and its regulations. Prof. Kabudi has been a consultant to the Government of Tanzania on review and drafting of laws in areas of natural resources and water resources financed by the World Bank and other donor agencies in Tanzania and East Africa. Prof. Kabudi is a renowned Public Law expert having also served as a member of the Constitutional Review Commission that was tasked to draft a new Constitution.

In his maiden statement on the floor today, Prof Kabudi assured the House of his commitment to ensure integration is realized.  “Coming together as the EAC is not a matter of choice, but it is necessitated by geographical proximity, culture and the region’s geopolitics. Mr Speaker, I commit to do my best to spearhead the EAC Integration”, Hon Prof Kabudi said.  Prof Hon Kabudi appreciated the work done by his predecessor, Dr Augustine Mahiga.