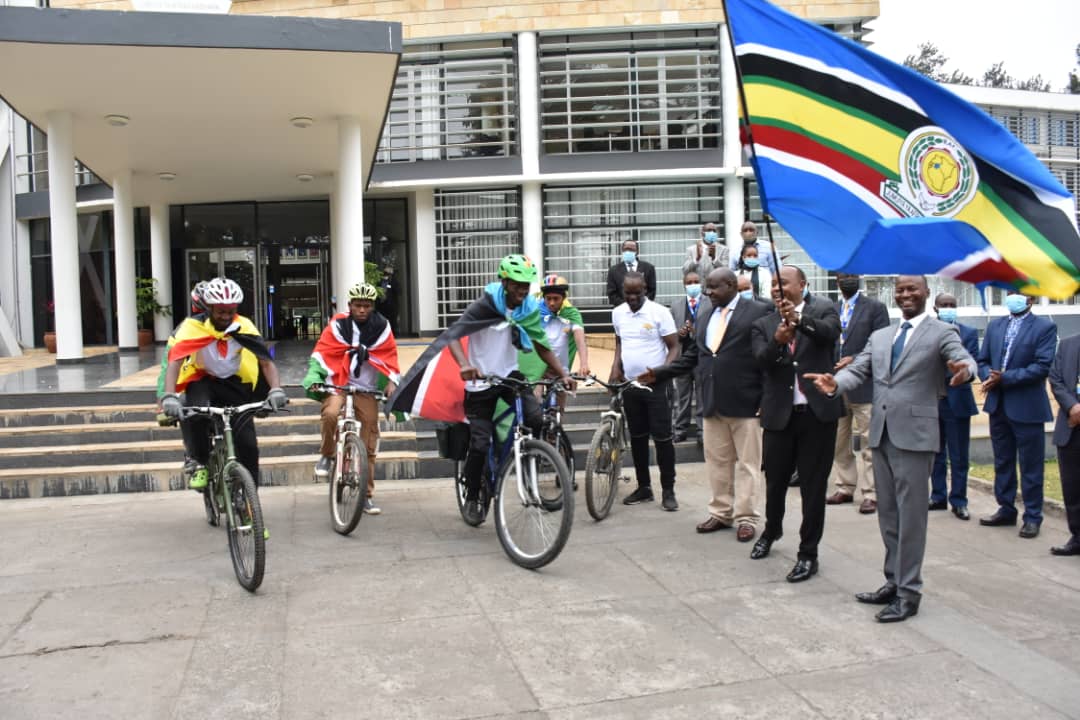 East African Community Headquarters, Arusha, Tanzania, 07th July, 2021: The EAC Secretary General, Hon. Dr. Peter Mathuki, has commended a team of cycling enthusiasts in the region for their commitment to the EAC integration process and their desire to spread the EAC gospel across the region as they prepare to embark on the 55-day, 6,000km long Great African Cycling Safari.

The Secretary General was speaking during the official launch of the 4th Great African Cycling Safari, at the EAC Headquarters in Arusha, earlier today.

Dr. Mathuki said that the Great African Cycling Safari was a worthy cause that should be supported by all Partner States, adding that it presents a unique opportunity for the integration not only in the region but in Africa as a whole, unified by the power of sports.

“This is the greatest cycling event in the world, the world-renowned Tour de France is a 10-day, 3,000 kilometre event. We must therefore take pride that our youth have come up with this initiative,” said the Secretary General.

The Secretary General said that the cyclists aim to create awareness around the integration process by sensitizing communities resident along the bike tour as they interact with them.

“This is of importance to the EAC because you are taking the integration process to the people who are its actual owners,” he said.

Speaking at the same event, the East African Business Council (EABC) Executive Director/CEO, Mr. John Bosco Kalisa commended the cyclists for their efforts in promoting a spirit of East Africanness, one that was built on unity, peace, and collective development.

Mr. Kalisa reaffirmed EABC’s commitment to partner and support the event by engaging EABC members and business leaders to join in the cycling segments, offer sponsorships, as well as in-kind donations as part of the private sector’s corporate social responsibility.

The Chairman of the Great African Cycling Safari, Mr. Francis Munywoki, said that the 2021 edition of the Safari being held under the theme “Green Africa: Experience Africa, Integrate Humanity” is also meant to create awareness on the various aspects of climate change.

“We are embarking on a journey to not only create awareness on the EAC integration agenda and the climate change challenges on the region, but to also do something to actually fix these challenges,” said Mr. Munywoki.

“There will be opportunities to plants tress, we already have 1,000 trees that have been donated by a partner, which we shall plant in Tanzania before we set off to Kenya,” he added.

Logfire Camps Executive and Expedition Director, Mr. John Bosco Balongo said that this year’s safari was an adventure and an opportunity for cycling enthusiasts to enjoy a sport they love and see the beauty East Africa has to offer.

“We expect this to be the biggest of the other three we have hosted in the past and are looking forward to growing this event to be a recognised international competitive event,” said Mr. Balongo.

During the border crossings of the Safari, the EAC together with EABC shall organize Public-Private Dialogues with Trade Facilitation Agencies at the EAC One-Stop Borders Posts as a platform to deliberate on challenges and strategies to better facilitate trade.

These tours have brought together local and international biking enthusiasts from all walks of life to experience the unique terrain and exotic culture, create awareness and promote the integration of East Africans and Africans in general.

This year’s event is envisaged to be the biggest cycling event in the world. It will officially kick off on 1st August, 2021 for a period of 55 days and come to a close at the EAC Headquarters on 25th September, 2021.

More than 1,000 participants from Africa, Europe, North America and Asia will cover 6,000 kilometers, traversing through five East African capitals, one city at a time. This year’s tour will start in Dar es Salaam in the United Republic of Tanzania and pass-through Nairobi, Kampala, Kigali, Bujumbura, Dodoma and terminate in Arusha on the foot hills of Mt. Kilimanjaro, Africa’s tallest mountain.

Participants can register for the event online, https://eactour.bike for US$25 for East Africans and US$ 500 for Non-East Africans for the entire tour. Cyclists have the choice of choosing a segment of any length they would like to join.