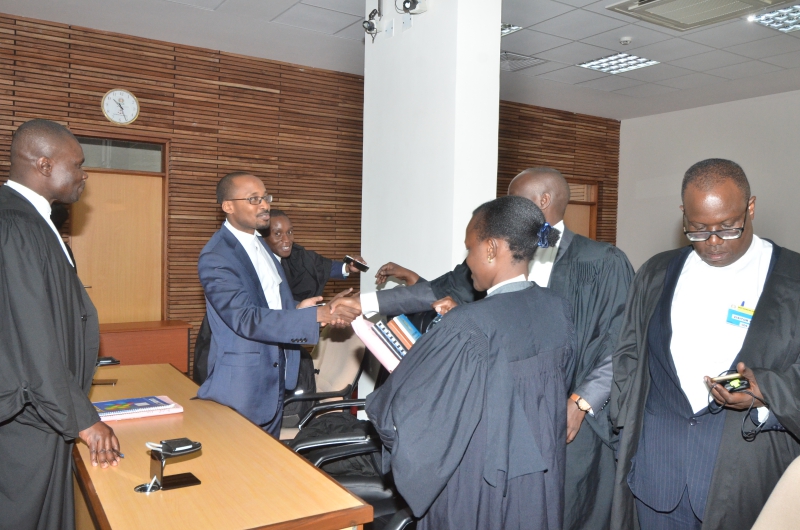 East African Court of Justice Arusha, 28th September, 2018: The First Instance Division on Thursday allowed the Applicant (Uganda Civil Aviation Authority (UCAA)) to appear as an Intervener in Reference No.11 of 2017, a Case filed by Uganda Revenue Authority (URA) challenging the government’s decision to the effect that URA is obliged to pay rent for the Customs Department at Entebbe International Airport. The First Respondent (URA) challenges the said decision as being unlawful and in contravention of the Treaty thus directly questioning the mandate of the Applicant.

The Court granted leave to the Applicant to intervene in the matter mentioned above and that its participation shall be limited to such support of the Second Respondent (Attorney General Uganda) as is propounded under Rule 36(2)(e) and (5) of the Rules. The Court further took the view that it would be in the wider interests of justice that it admits the Applicant as intervener but such intervention would be to the parameters of Rules mentioned above.

The Court was also persuaded by the 2nd Respondent’s argument, that the Applicant’s said legal interest would be substantially affected by a contrary decision by this Court hence the need for the Applicant to be granted leave to intervene and present its intrinsic interests in that regard.

The Court also said it has carefully considered the Notice of Motion and find a Statement of Interest therein. It is clear to the Court that the outcome of the Reference before the Court has, with or without intervention, a direct impact on the Applicant. That the remedies sought by the First Respondent (URA) have a bearing and a direct effect on the Applicant’s (UCAA) supposedly legitimate expectation of payment for use of its spaces at Entebbe International Airport. Needless to say, it is not the Second Respondent (AG Uganda) who is likely to bear the brunt of a decision in favour of the First Respondent in the Reference.

The Court added that the First Respondent conceded in his submissions at the hearing that “the case arose from menacing demands for rent by the Applicant from the URA (First Respondent), for the latter’s occupancy and use of aerodromes at Entebbe International Airport for customs purposes.”

In conclusion, Court In arriving at this decision, it was mindful of the fact that, a Court faced with an Intervener’s statement may only take what it considers relevant from such an intervener in light of Article 40 of the Treaty, the ultimate control over an Intervener’s intervention remaining with the Court itself. The Court ordered each party to bear its own costs.

On 4th September 2017, the Attorney General of Uganda (“the Second Respondent”) rendered a decision against the Uganda Revenue Authority (“the First Respondent”) in favour of the Civil Aviation Authority of Uganda (“the Applicant”), in a dispute as to payment of rent by the former for the occupation and use of office space at Entebbe International Airport.

The First Respondent (URA) subsequently filed Reference No.11 of 2017 the Uganda Revenue Authority vs. the Attorney General of Uganda in this Court, challenging the legality of that decision on account of its alleged violation of the Treaty for the Establishment of the East African Community (“the Treaty”) and the East African Community Customs Management Act (“the EACCMA”).

By its Notice of Motion dated 5th December, 2017 and filed on 11th December, 2017, the Applicant (UCAA) has since sought leave, pursuant to the provisions of Article 40 of the Treaty and Rules 21 and 36 of the East African Court of Justice Rules of Procedure 2013 (“the Rules”), to be joined as an intervener in the Reference in opposition to the case advanced by the First Respondent which has been allowed and granted by court.

Article 40 of the Treaty provides that; A Partner State, the Secretary General or a resident of a Partner State who is not a party to a case before the Court may, with leave of the Court, intervene in that case, but the submissions of the intervening party shall be limited to evidence supporting or opposing the arguments of a party to the case.

Rule 36 of the Court’s Rules of Procedure.  It reads: