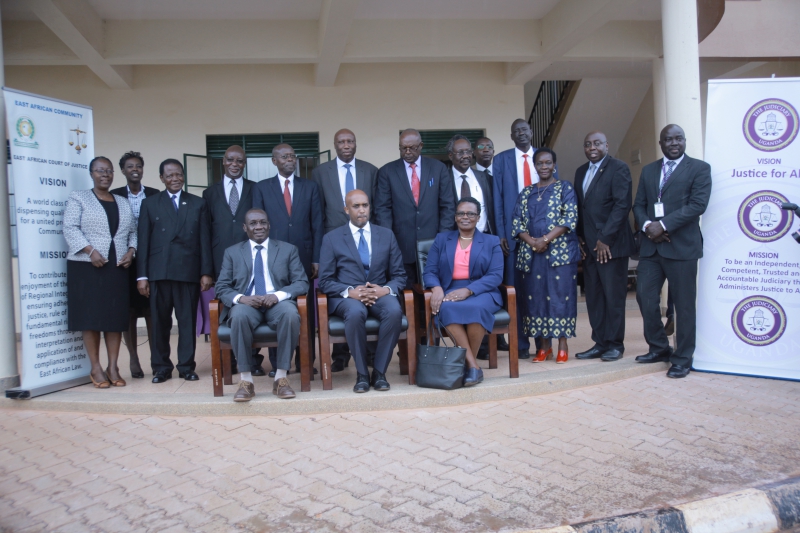 East African Court of Justice Arusha, 19th June 2018: The President of the East African Court of Justice, Hon Justice Dr Emmanuel Ugirashebuja, while at the opening of a three days sensitization workshop for the Judges, State Attorneys and Members of the Bar Association of the Republic of Uganda on the role of the Court in the advancement of the East African Community Integration agenda, called upon the participants to strengthen their cooperation and relationship with the Court.

His Lordship told the participants that, the future and effectiveness of the Court will largely depend on its relationship with other stakeholders. “Your role as Judges, State Attorneys and Advocates is very crucial in the development of the EAC laws, jurisprudence and uniform interpretation and application of the EAC law.” Said the President of the Court. He further added that, it is only jointly that the partners in the rule of law chain can develop the potential of East African integration and reap the benefits it offers.

Justice Ugirashebuja in his remarks further said that, East African integration is of utmost importance to all the Partner States in the region, economically, politically and socially and that through integration and the development of an internal market, economic growth is inevitably stimulated. However, he added that the path to a high level of political, socio-economic, cultural and financial integration is sometimes fraught with uncertainties, and is at times long and bumpy. Most of these challenges are legal.

His Lordship emphasized on the role of the court, which is crucial in resolving disputes which would otherwise threaten the survival of a Community. That the existence of dispute is real and to an extent an important ingredient of any development as a Community. He also said that the absence of dispute should not be the focus of the evolution of the EAC, but the focus should be on how we resolve the disputes. Justice Ugirashebuja further added that without an effective dispute resolution mechanism, the survival of the Community is at stake and that without its case law, and many principles that the Court has developed and will continue to develop, the Community will certainly not be where it is today and will not arrive at where it aims to be.

The Executive Director of the Judicial Training Institute (JTI) Hon Justice Henry Peter Adonyo, who was also in attendance, commended the EACJ President, “We at the Judicial Training Institute thank the EACJ for choosing to bring to the Institute this important exercise which could have very well been held elsewhere. We appreciate and thank you for your confidence in the Institute and we hope that we are not a disappointment to you.”

Justice Adonyo also noted that the sensitization workshop will equip you the participants with relevant knowledge about the EACJ and the EAC at large so that at the end of the day you have adequate knowledge and become familiar with the institutional arrangements of the East African Community and more especially the East African Court of Justice and thus reflect on how each and every one of us can contribute to its effectiveness.

The workshop was also attended by the Hon Lady Justice Jane Kiggundu representing the Principal Judge of the High Court of Uganda, the representative of the Attorney General of the Republic of Uganda, Mr J.B.R Suuza, President of the Uganda Law Society, Mr Simon Peter M. Kibone among others.

During the workshop, there were a number of paper presentations made on the role of the judiciaries in East Africa in the integration process and the relationship of EACJ with National Courts, a paper which was presented by the President of the Court (EACJ), Hon Justice Dr Emmanuel Ugirashebuja, a paper on the legal and Judicial framework of EAC and EACJ that was presented by the Hon Justice Dr Charles Oyo Nyawello, the Jurisprudence of the Appellate Division done by Justice Geoffrey Mupere Kiryabwire of the EACJ Appellate Division as well as Justice of the Court of Appeal of Uganda. Justice Kiryabwire also delivered a paper on the role of ICT in efficiency administration of Justice at the EACJ. Lastly there was a paper on the jurisprudence of the EACJ First Instance Division and judicial responsibilities by the Deputy Registrar Her Worship Ms Geraldine Umugwaneza and the Research Officer of the Court Ms Wanjiru Kathleen Rubia.

The Court has held the same sensitizations in some of the Partner States like the Republic of South Sudan, Burundi, now Uganda and next week will proceed to Rwanda and then later in Dar Es Salaam and Nairobi Kenya.