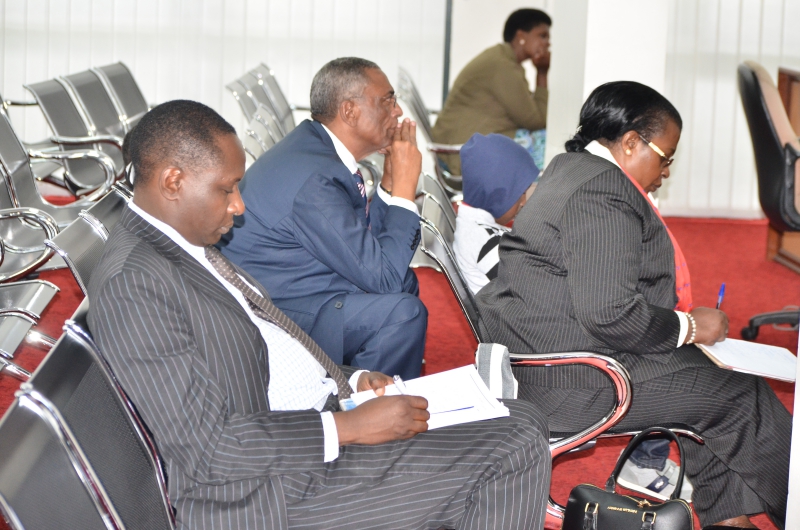 Appellate Court rules in favour of Hon Margaret Zziwa and awards her $114,000 as special damages and other costs

The Appellate Division on Friday ruled in favour of Hon. Dr. Margaret Nantongo Zziwa (Appellant) and ordered that she be awarded compensation in the sum of US$114,000 with interest thereon at six (6) per cent per annum from 24th February, 2015 when she filed her Amended Reference till payment in full. This was a result of her illegal removal from the office of the Speaker of the East African Legislative Assembly (EALA) which the Court averred was an infringement of Articles 53 and 56 of the Treaty for the Establishment of the East African Community.

The Appellate Court in its judgement set aside the findings by the Trial Court (First Instance Division) that it had no jurisdiction to grant the remedy of damages and substituted it with a finding that the Trial Court had the jurisdiction or mandate to grant that remedy. It also set aside the order on costs by the Trail Court and ordered that the Appellant be granted the costs of the Reference and of the Appeal, and that such costs are certified for two counsels.

“We are of the firm opinion that the full effectiveness of East African Community Laws including the Treaty and the protection of the rights granted by such laws requires the Court to grant effective relief by way of appropriate remedies in the event of breach of such laws,” said the Judges.

The Court added that the Trial Court having found that the proceedings for the removal of the Appellant as Speaker were null and void and that, accordingly, her removal was illegal and in breach of the Treaty, it followed, in their view, that in the eyes of the law she continued to hold the office of Speaker and the Court could not but order her reinstatement as part of its mandate to ensure adherence to the law and compliance with the Treaty.

In addition, the Appellate Court held that Articles 23(1) and 27(1) of the Treaty do not confine the Court’s mandate to mere interpretation of the Treaty and the making of declaratory orders but confer on the Court, being an international judicial body, as an aspect of its jurisdiction, the authority to grant appropriate remedies to ensure adherence to law and compliance with the Treaty.

The Court also found and held that the lamentation by the Trial Court that it had no power under the Treaty or the Rules to grant the remedy of reinstatement was without justification in the Treaty itself or in the law of responsibility of international organizations.

Furthermore, the Appellate Court rejected the submissions of the Respondent (the EAC Secretary General) that the prayer for the reinstatement of the Appellant was moot or overtaken by events as at the date of Judgment by the Trial Court. The Appellate Court noted that the record shows that the Appellant was suspended from office on 26th November 2014, she filed the Reference on 10th December, 2014, Hon Kidega was elected as Speaker to replace her on 19th December, 2014, the Amended Reference was filed on 24th February, 2015, the Judgment of the Trial Court was delivered on 23rd February, 2017, and the life of the Assembly ended in June 2017.

On the question as to whether the remedy should have been refused in regard to the doctrine of separation of powers, the Court rejected the Trial Court’s holding to that effect, that EALA having violated Article 56 of the Treaty in removing the Appellant from office and that conduct being attributable to the Community in international law (as was determined by the Trial Court), the Community cannot invoke the doctrine of separation of powers to bar the Court from ordering her reinstatement on the basis that matters of election and removal of the Speaker are within one of its organ’s exclusive mandate.

Also, the Court added that it is in complete agreement with the jurisprudence from the superior courts of the Partner States  cited, from which may be distilled the principle that the doctrine of separation of powers is only sacrosanct (untouchable) where the independent organs of the State concerned are acting within the law.  That any State organ or institution that marches out of step with the law is liable to be brought in line by the courts with the sword of checks and balances. In the premise, the doctrine of separation of powers could not and cannot in either international law or internal law (which is not relevant in the case at hand) shield any Community organ or institution from judicial scrutiny for any transgression of the Treaty or other Community laws.

As regards certification for two Counsels, the Court said that the Appellant was represented by Counsel from two different law firms in Kampala, Uganda.  In the result, “we would certify the case as appropriate for costs for two Counsels in this Court and below.” The Appellant is, in this Court, as she was in the Trial Court, represented by Mr. Justin Semuyaba, duly instructed by Semuyaba Iga & Co. Advocates of Kampala and Mr. Jet John Tumwebaze, duly instructed by the firm of Kampala Associated Advocates of Kampala.  Both Counsel for the Appellant and herself Hon. Dr. Zziwa accompanied by Captain Francis Babu, were present in court to receive the Judgment. Dr Anthony Kafumbe Counsel to The Community and his Representative Ms Brenda Ntihinyurwa, for the Secretary General were also present in Court.