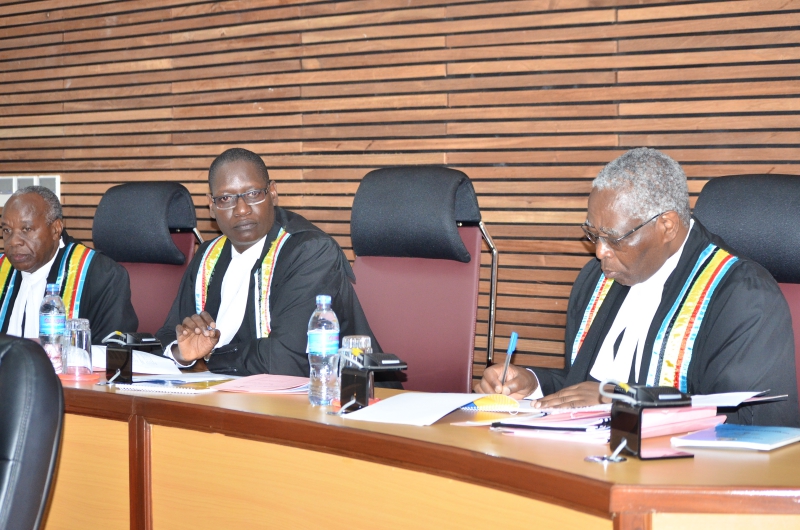 The Appellate Division allowed the Secretary General’s Application between him and Angella Amudo. The Application (1st matter heard) was seeking the Court to expunge the initial Affidavit (sworn statement) filed on 2nd December 2016 in reply to her case  (Taxation Reference No. 1 of 2016).

The Court ruled that the said Affidavit be replaced with the one sworn on 19th July 2017 by Honourable Jesca Eriyo. The Court further said that, the Respondent (Angella) was duly served, she has not appeared and there are no grounds of opposition on the affidavit and in the circumstances the Application was not opposed.

The 2nd matter (Application No. 1 of 2017) she was challenging a bill of cost in Taxation cause No.1 of 2015 lodged by the Secretary General of the East African Community, that the bill of cost does not bear the signature of the taxing officer (Registrar of the Court) at that time and that the same was not served upon her within the prescribed time. She therefore objects the hearing of the taxation matter for the allegation of being lodged contrary to Rules of the Court. Rule 113(3) of the Court Rules which provides that:

In the 3rd matter (Taxation Reference), Angella Amudo was seeking for court orders to set aside a taxation award of a sum of two thousand and ten dollars (2010 USD) granted to the Secretary General of the EAC as cost for perusals, drawing, filing documents in Court and service to the parties in the matter.

Present in Court was Ms Brenda Ntihinyurwa, Legal Expert from the Office of the Counsel to the Community representing the Secretary General.

The orders of the Court was delivered by Honourable Justices: Liboire Nkurunziza (Vice President), Edward Rutakangwa and Aaron Ringera with of the Appellate Division in open Court.

Rule 1 .(2) provides that: Nothing in these Rules shall be deemed to limit or otherwise affect the inherent power of the Court to make such orders as may be necessary for the ends of justice or to prevent abuse of the process of the Court.

Rule 113 (3) (2) and (1): provides that: (1) The Registrar shall be a taxing officer with power to tax the costs of or arising out of any claim or reference as between parties.

(2) The remuneration of an advocate by the client shall be by agreement between them. Where there is no such agreement either of the parties may refer the matter to the Registrar for taxation.