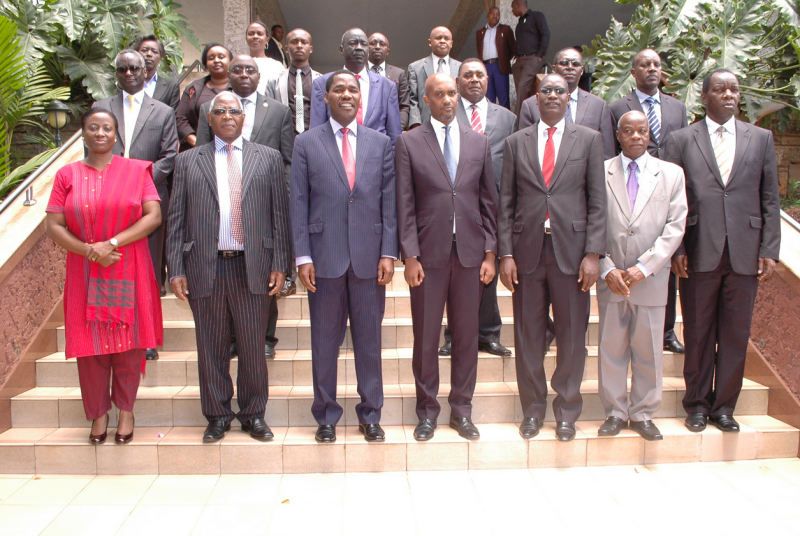 Hon Peter Gatirau  Munya, Cabinet Secretary in charge of the Ministry of East African Community and Norther Corridor Development, Republic of Kenya,at the closing ceremony of EACJ Plenary, committed to pursue to the Council, the conclusion and determination of the permanent seat of the Court urgently, to enable the Honorable Judges to work on a permanent basis as opposed to the current ad-hocarrangement.

He said that it is necessary as the integration process continues to grow, to ensure that the Court’s officials can fully concentrate on the discharge of their crucial mandate in the service of the Community.

He also a lauded the Court for its very progressive jurisprudence, which has served as a guiding light for our national courts as well as other courts around the World. “Despite the Court’s jurisdiction being initially limited to the interpretation and application of the EAC Treaty, the Court has not been deterred from creatively making pronouncements on other crucial matters like respect for the rule of law and human rights” said the Cabinet Secretary.

He further added that “we must recognize that the extension of the jurisdiction of the Court is a process and a journey, which in the fullness of time, will lead to a further expansion, as the Community grows and integration continues to deepen and widen.”

Hon Munyi further said that, the role of the Court in the integration process cannot be overemphasized, that, the Court’s effective and efficient execution of its mandate as an arbiter in dispute resolution contributes greatly to confidence building in the region. It also ensures uniformity in the application of legal principles and laws across the EAC, which ensures certainty in trade and other aspects of integration.

The Cabinet Secretary noted that, the Court has continued to strengthen the rule of law and development of human rights standards by boldly denouncing human rights violations, and pointed a case from the Republic of Rwanda Versus Plaxeda Rugumba (Appeal No. 1 of 2012), where the Appellate Division of the Court explicitly stated that holding a person incommunicado for five months without judicial order, was an obvious breach of the principles of the Community espoused in the EAC Treaty.

He commended the jurisprudence of the Court which demonstrates the Court’s adherence to the doctrine of separation of powers and this was illustrated in the case of Mbidde Foundation Limited & Hon Margaret Zziwa, where the First Instance Division declined to intervene in EALA’s process of impeachment of the Rt. Hon Zziwa as Speaker of EALA, on the basis that, it would amount to undermining the doctrine of the separation of powers.

He further acknowledged the crucial role that the Court has played in resolving disputes within the Community as expressed in the Treaty, which is a living document that continues to be kept alive by the Court’s pronouncements.

Hon Munya strongly urged the Court to increase its public engagement and outreach activities in order to raise awareness on the Court’s mandate and it’s extended and arbitration jurisdiction, so as to ensure that this great Organ of the Community does not remain under-utilized. He also assured the Ministry’s support in walking the journey, for greater good of the people of East Africa.

He retaliated that Kenya remains a solid, committed and responsive Partner in the EAC integration process. As a country, “We fully support the fundamental principles of the Community as enumerated in Article 6 of the EAC Treaty which include peaceful co-existence, good neighborliness, good governance, cooperation for mutual benefit and peaceful settlement of disputes which is particularly relevant to the mandate of the Court”, said the Cabinet Secretary

His Lordship, the President of the Court, Justice Dr Emmanuel Ugirashebuja, commended the Cabinet Secretary for his support and informed him of the resolutions adopted by the Plenary, among others is the adoption of the EACJ Strategic Plan 2018-2023 and the proposals on the amendments of Chapter 8 of the Treaty.

He also told the Cabinet Secretary that, the Plenary also resolved to fully implement the financial and administrative autonomy that was unconditionally granted by the Council of Ministers in 2016.

The President called upon the Cabinet Secretary to express the challenge to the Heads of State and to end the ad-hoc service of the judges. He finally thanked the Judges and Staff of the Court for their contribution to the development of the Strategic plan and encouraged them to be more committed as the implementation process begins immediately.

The court Plenary followed several workshops: The Validation of the EACJ Strategic Plan for the next five (5) years 2018-2023, that was adopted, the Rules Committee meeting which reviewed and proposed amendments of the rules of procedure of the Court, to ease the litigants concerns and the training of Judges and Registrars on arbitration practices, All the meetings took place in Nairobi and were earlier officiated by the Chief Justice of Kenya.

The Plenary was attended by the all Judges, Registrars and staff of the Court.