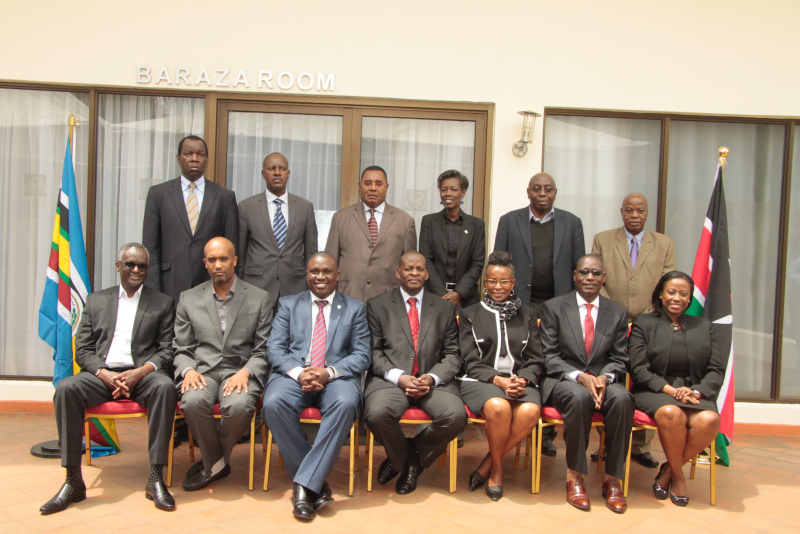 EACJ Judges & Registrars training on Arbitration sets off in Nairobi

EACJ Judges and Registrars resumed a two-day training on arbitration, facilitated by the Chartered Institute of Arbitrators, Kenya. The training mainly covers a number of issues on arbitration process, and these include: arbitration practice, drafting and decision making in settling disputes.

His Lordship the President of EACJ, Justice Dr Emmanuel Ugirashebuja, in his remarks said that, as the Court grows, there is need to improve on the knowledge and skills of the Judges in arbitration jurisdiction and practices within the region. He further said that as Judges, “We need to have an open mind to learn a lot and to change the Judge/Lawyer mind set to the arbitrator mind set, in order to be effective arbitrators” His Lordship stated.

Justice Ugirashebuja,  emphasized that, the Court will continue engaging the Institute in such training programs to enhance its capacity building.

The Court has so far handled two arbitration disputes and as the Common Market Protocol implementation process continues, several disputes are likely to arise, hence the residents of the Community may bring the matters to the Court for interpretation and settlement.

In an interview with the Chairman of the Chartered Institute of Arbitrators, Mr Calvin Nyachoti said that, it is very important to equip the regional Courts with the arbitration knowledge, so that Litigants should not take such disputes outside East Africa and Africa as whole, which is very costly. He also added that arbitration is faster than Court litigation because a case in court can take more years compared to arbitration.

Mr Nyachoti, commended the commitment of the EACJ in continuously engaging in arbitration trainings, to improve the Judges knowledge on arbitration. He said that there is no doubt this will benefit the residents of the Community as the court continues to receive various disputes on arbitration.

He encouraged the Court noting that most of the East African Partner States have adopted arbitration as a dispute settlement mechanism with in their respective jurisdictions, these include the Republic of Kenya, Rwanda, Uganda and United Republic of Tanzania.

Mr Nyachoti also commended the judges for taking the training as the arbitration knowledge and skills will enable them fully join the arbitration fellowships in their respective countries once they complete their tenure at the EACJ.

He further said that, early this year in February, the Institute engaged the COMESA Court of Justice in training the Judges in arbitration practices and will also engage the African Court of Human and Peoples’ Rights in May 2018.

Arbitration is the process of settling disputes that arise from commercial agreements, the matters are handled in private unlike litigation where a case is handled in public Courts.

In attendance were Judges of the Court, Registrar & Deputy Registrar. The facilitators from the Chartered Institute of Arbitrators include: Mr Collins Namachanja, Course Director, Ms Njeri Kariuki, Tutor and Mr Simon Ondiek, facilitator.