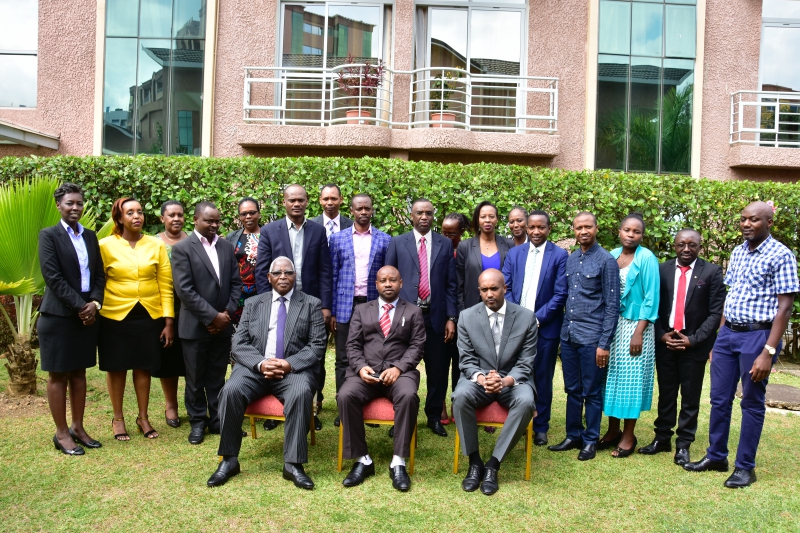 East African Court of Justice Kigali, 20th June 2018: The Minister of Justice and Attorney General (AG) of the Republic of Rwanda who was the Chief Guest, represented by Mr Theophile Mbonea, Head of Legal services in the Office of the AG, congratulated the Court on realizing the objective of sensitizing the State Attorneys who are among the key litigants that appear before the EACJ to argue the cases filed against the government of Rwanda.

In his opening remarks he added that, it is therefore essential for the Court to have thought about this sensitization workshop and call upon all the participants to utilize this unique opportunity to share the knowledge and experience of the EACJ with their Lordships facilitating the workshop.

Hon Minister also commended the EACJ for the new developments of the Court such as e-filing system which will enhance access to court and its efficiency in delivering justice. “I am aware of the online case management system which has reduced costs for the litigants while filing and serving process to the court.  The Attorney General’s Office embraces the use of advanced technology by the EACJ and will remain supportive to ensure the system is fully working where there is need” Said the Minister of Justice.

The Chief Guest further noted that establishment and the presence of the EACJ Sub-registries in all Partner States has brought services of the Court closer to the people of East Africa. That it is no longer just hearing about ‘‘The Arusha Court’’ as it was before, but Rwandans have started actually seeing the “East African Community Court” among them. He added that those who feel aggrieved by laws or decisions that seem to violate the East African Community Treaty and hence undermine the goals and objectives of integration, and who wish to have the matters determined by the EACJ and get a remedial decision of the Court.

The Minister also emphasized on the cooperation between the EACJ and the Office of the Attorney General, that it is not new and encouraged the Court to continue with the workshops, trainings to the State Attorneys, Judges and Members of the Bar Associations in the Partner States on the role, practice and procedure of the Court that are different from the national courts. That it will help them gain more experience with the practices of the regional court.

The Minister also pointed out the willingness of the government of Rwanda and anticipate its participation in the EACJ’s programs will significantly add to ideas that contribute to the harmonization of our laws and procedures towards a uniform dispensation of justice in the region and greater integration. He added that this is in line with the requirement in Article 126 of the Treaty which states that “In order to promote the achievement of the objectives of the Community set out in Article 5, the Partner States shall take steps to harmonize their legal training and certification and shall encourage the standardization of the judgments of courts within the Community”.

The Chief Guest concluded by encouraging the leadership of the Court to continue conducting and rotating such important sensitization workshops to all Partner states which will contribute to the visibility of the Court and participation of the Offices of the Attorneys General in the Partner States.

President of the East African Court of Justice, Hon Justice Dr Emmanuel Ugirashebuja, on his part commended the support by the Ministry of Justice and the Office of the Attorney General of Rwanda as one of the key litigant of the Court and pledged to continue working together in ensuring justice delivery to the people of East Africa and Rwandans in particular.

He encouraged the State Attorneys to use the knowledge gained from this workshop and expect to see the positive outcome when they come to Court.

​The three-day workshop is being facilitated by the EACJ President, Justice Aaron Ringera, Deputy Registrar and Research officer and other staff of the Court.