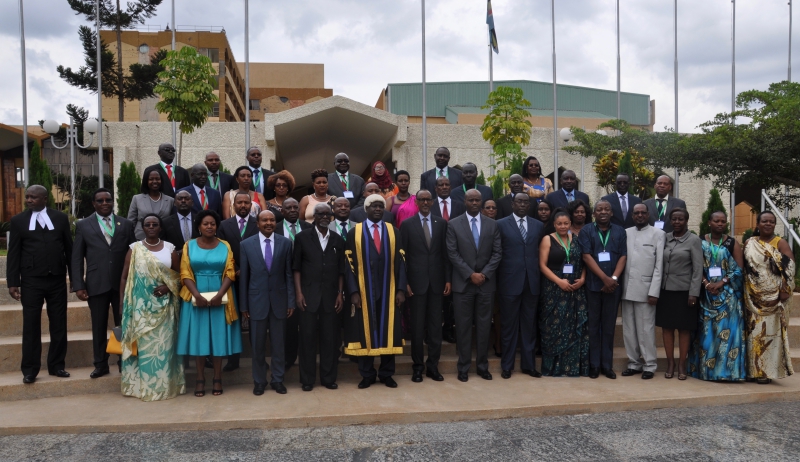 The President maintained that Rwanda’s commitment to the regional bloc, ten years after acceding to the Treaty for the Establishment of the EAC was stronger than ever before, he said, lauding the Partner States for their significant contribution to the EAC and for working together to deepen regional integration.

“Much of this is as a result of political will in responding to the needs and the aspirations of our citizens of the region,” H.E Kagame said. The President said a united Africa was key and took the opportunity to inform the regional legislators of reforms aimed at strengthening the African Union by ensuring it is sustainably financed by Africa’s own resources.

“We need an African Union that is fit-for-purpose. Our continent must also have a strong and unified voice that clearly communicates the aspirations and positions of Africa on the global stage”, President Kagame said.

The President said the Heads of State had agreed to transform the annual July Summit of the continental bloc into a co-ordination meeting with the Regional Economic RECs.

“This means that greater contributions will be needed from all of you as the region’s legislators, both as strong advocates for the imperative of reform and as champions for closer cooperation between the EAC and the African Union Commission,” he added.

President Kagame further challenged the regional Assembly to enhance its oversight role in ensuring the EAC meets its desired objectives. “We therefore count on you, in the oversight role of our regional legislature to help ensure we maintain momentum and stay on course”, he said.

The President took the opportunity to speak a few words in Kiswahili much to the applause of the legislators.

“I am happy as has been mentioned that Rwanda has adopted Kiswahili as an official language, in line with one of the key resolutions of the East African Legislative Assembly”, the President reiterated.

In attendance were Members of the Senate, Chamber of Deputies and high ranking government officials from the Republic of Rwanda.

The Speaker of the Assembly, Rt Hon. Daniel F. Kidega in his remarks reiterated the need for the region to collectively address and find solutions to the challenges it faces citing some of them as pursuit for peace and security, drought, climate change and the unemployment bulge.

“Ideally, time has come for the EAC to draw on its collective economic, social and intellectual resources to address the imminent challenges it faces”, Speaker Kidega said.

“Excellency, of equal importance is tolerance by Partner States within the framework of the integration process, to tackle the region’s pursuit for peace and security, drought, Climate Change, the unemployment bulge and other pressing issues”, he added.

The Speaker called for concerted effort towards the industrialization process of the region.

“There is need to embrace industrialization by instituting supportive trade related policies and frameworks that grant Partner States the right to nurture nascent industries in order to develop their competitiveness and grow economies”, Speaker Kidega noted.

He said the EAC was looking towards greatly benefitting from the operationalization of the Single Customs Territory resulting in increased intra-regional trade. In this regard, Rt Hon Kidega called for emphasis on investor confidence, enterprise and creation of a conducive environment to spur trade.

The Speaker appealed to President Kagame and his colleagues at the Summit of EAC Heads of State to ensure the funding situation which he deemed as dire, is speedily addressed.

The Speaker hailed President Kagame for his selfless commitment to the integration process.

In his remarks, the President of the Rwanda Senate, Rt Hon. Makuza Bernard hailed the rotational sittings noting it had enabled regular interactions with citizens of the Partner States. He said it was therefore necessary to reflect on the developments over the last five years at the Assembly and at the EAC while calling for the intensification of the integration process.

In her vote of thanks, Hon. Nusura Tiperu hailed Rwanda for taking the lead in implementing decisions agreed upon at the region level. She hailed Rwandans as hardworking people, committed to duty of serving their motherland and the region.

At this sitting, which is the last for Kigali under the principle of rotation before the 3rd Assembly winds its tenure, three key Bills are on the agenda. These are the EAC Gender Equality and Development Bill, 2016, the EAC Polythene Materials Control Bill, 2016 and the EAC Sexual and Reproductive Health Rights Bill, 2016.

The EAC Gender Equality and Development Bill, 2016 makes provision for gender equality, protection and development in the Community. The Treaty for the Establishment of the EAC in Article 121 recognizes the significant contribution that women make towards progress of socio-economic transformation and sustainable growth and the importance of full participation of women and men in the economic and social development of the Partner States.

The EAC Polythene Materials Control Bill, 2016 moved by Hon. Patricia Hajabakiga, aims at providing a legal framework for the preservation of a clean and healthy environment through the prohibition of manufacturing, sale, importation and use of polythene materials. The Bill was re-introduced during the Sitting held in August 2016 in Arusha, Tanzania.

The EAC Sexual and Reproductive Health Rights Bill, 2016, on its part, anticipates provision of legal framework for matters relating to sexual and reproductive health, to protect children, adolescents and young children from sexual abuse and other forms of exploitation and to provide for assisted reproductive technology and for related matters.

Also to be deliberated on during the two week period are reports from various Committees of the House, including that of the Communications, Trade and Investment Committee on the status of the Railway Infrastructure Development in the Partner States and another on the oversight activity on the One Network Area in the EAC.

A report on the newly established EAC Institutions and another one on the Pastoral Cross-Border Communities of Longido, Tanzania and Kajiado in Kenya shall also be tabled and debated. The latter report follows an oversight activity carried in the Kenya-Tanzania border by the Committee on Regional Affairs and Conflict Resolution while the former is as a result of an oversight activity by the Assembly’s Committee on Accounts.