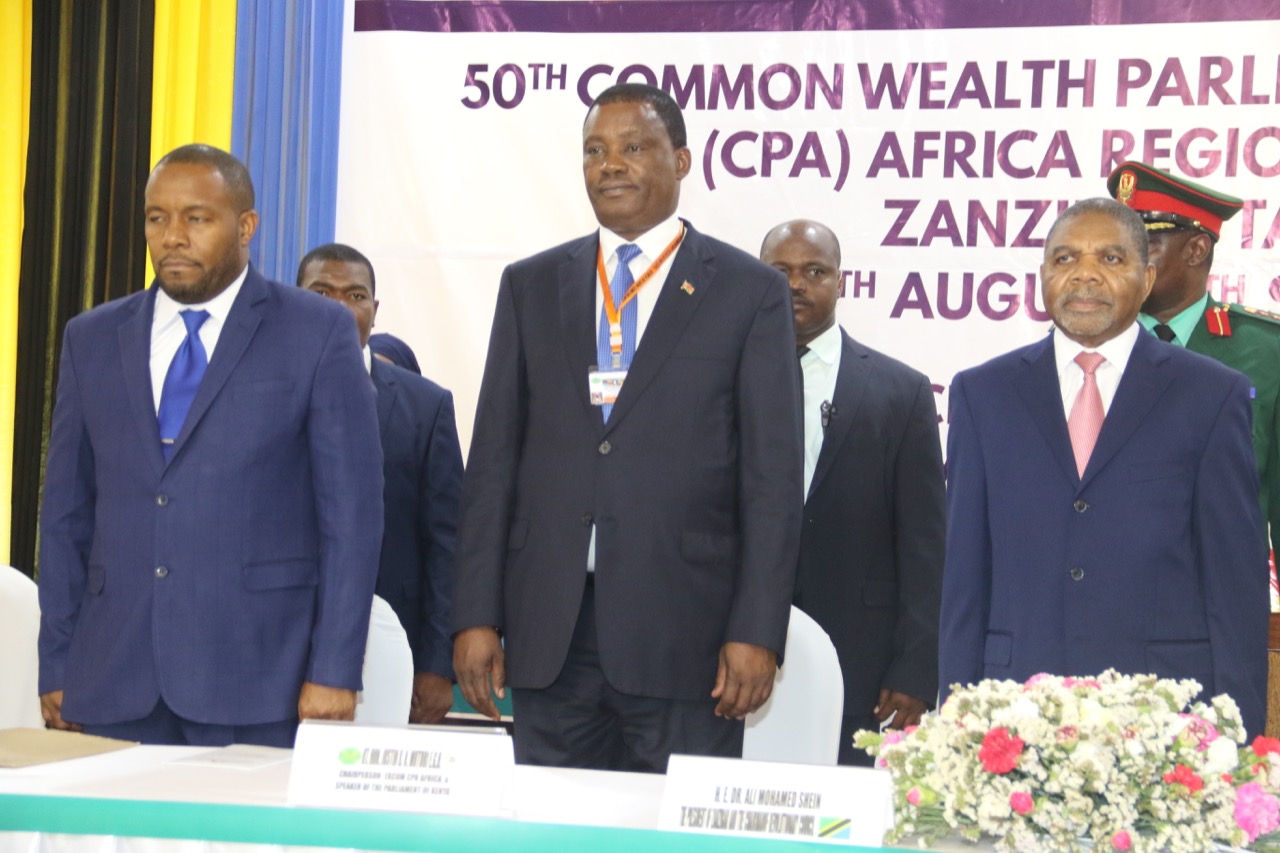 …EALA Speaker in attendance, calls for leverage of ICTs in Parliamentary democracy

H.E Dr Ali Mohammed Shein, President of Zanzibar and Chairman of the Revolutionary Council, opened the Conference as the august body celebrated its golden Jubilee in the coastline of Zanzibar.

President Shein remarked that by embracing Information, Communication and Technology (ICTs), the region and continent would make further progress noting use of electronic systems as important component of development. The 50th CPA Africa region conference is themed: E-Parliament: Seamless Platform for Facilitating Democracy”

H.E. Dr Shein lauded the CPA for the pragmatic topic of discussion. “This theme is important and relevant to technological development and global efforts to promote democracy.   Embrace of E-Parliament remains a vital step in enhancing legislation, representation, oversight”, H.E. Dr Shein remarked.

“Through E-Parliament systems, Members can connect to constituencies and the people they represent and such, will enable citizens also to present their views and opinions through e-processes and reduce on costs”, the President of Zanzibar said.

H.E. Dr Shein maintained that Zanzibar had embraced the e-Government projects in various sectors including the medical and tourism sectors.

“Let me inform you that government of Zanzibar is now using ICTs in all interactions including records management, and in the early warning systems among others. Within the health sector at the Mnazi Mmoja Hospital, we have embraced telemedicine while the neurosurgical department has also beefed use of ICTs’, he added.

The President added that Hotels were also fine-tuning the use of e-tourism which shall mark a paradigm shift in the sector.  H.E. Dr Shein called on delegates to explore the various opportunities for investment in the island saying Zanzibar was open to all investors, offering incentives and with rewarding returns.

Speaker of EALA, Rt Hon Ngoga Karoli Martin emphasized the role of ICTs, saying it was a key ingredient in revolutionalizing the mode of doing business in all sectors, including Parliaments.

Rt Hon Ngoga termed the embrace of e-systems in parliamentary work as an idea whose time had come. “It is a debate that we can no longer ignore, leave alone forget – but one we must confront and take head on”, the EALA Speaker said.

“Leveraging on the exponential growth of ICTs and particularly on e-Parliament, may therefore, make democracy more inclusive, prudent and transparent. The responsibility lies on us to embrace e-voting, e-democracy and e-campaigning, among others, which reflect on the new thinking, understanding and practices of how Parliaments must operate in the ICT dispensation”, Rt. Hon Ngoga added.

“As legislators, we have to play our rightful and expected role to harness our continent through this historic milestone. I am confident that together we will steer our various regions and the continent to the much-cherished unity and prosperity”, he added.

Also in attendance is EALA Member and Chair of the Chapter of United Republic of Tanzania, Hon Dr Abdullah H. Makame.

Speaker of the Parliament of Tanzania, Rt Hon Job Ndugai and the host Speaker, Rt Hon Zubeir Ali of the Zanzibar House of Representatives, also addressed the Conference.

Speaker of the Parliament of Uganda, Rt Hon Rebecca A. Kadaga, who doubles as the President of the CPA International remarked that Uganda was ready to host the 64th CPA International Conference, scheduled for September 22-27th, 2019 in Kampala, Uganda. Speaker of the Kenya National Assembly and Chairperson of the CPA Africa Executive Committee, Rt Hon Justin Muturi reiterated effective usage of internet as a catalyst in parliamentary democracy.

Rt Hon Muturi cited the tremendous advancement in digital technology as crucial and necessary to adopt.

“Paperless Parliaments are the way to go. We cannot avoid it.  Let us adopt the mode of communication as we promote good governance. Let us enhance the same as we enhance parliamentary democracy”, Rt Hon Muturi stated.

Over 600 delegates are in attendance.

The Commonwealth Parliamentary Association (CPA) is composed of over 180 branches formed in legislatures in the Commonwealth countries which subscribe to parliamentary democracy. The Members of the legislature in which a branch is formed are entitled to become Members of that branch. For a branch to to qualify, it must be a legislative body, thus both national and state or provincial Parliaments as well as the legislatures of dependent territories may be Members.

The CPA Africa region Secretariat is hosted in Dar es Salaam by the Parliament of Tanzania.