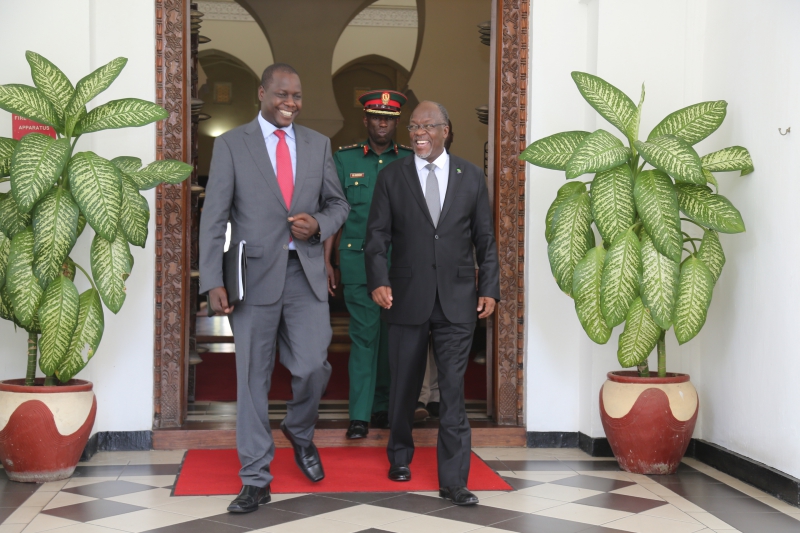 President of the United Republic of Tanzania and Chairperson of the EAC Heads of State, H.E. Dr John Pombe Joseph Magufuli has hailed the East African Legislative Assembly (EALA) for its unbounded dedication to the integration process.

Central to this aspect the Head of State added, was the Assembly’s rotational principle of holding its Parliamentary Sessions in Partner States, which he said, endeared it (EALA) to many citizens on the one side, while enhancing its public visibility on the other side. The Head of State rooted for the expansion of the bloc saying there was unity and strength in numbers and remarked that one of the fundamental objectives of the bloc was to address imminent challenges facing Partner States.

The President added that the Summit of EAC Heads of State for which he currently chairs, was committed to addressing the existing challenges in all Partner States and specifically in the respective Republics of South Sudan and Burundi.

The Head of State said the situation of food security in the region was not entirely worrying as portrayed in many circles. The President while calling for concerted efforts to address the situation, mentioned of surplus grain reserves in the Republic of Uganda and in the United Republic of Tanzania.

The President further rooted for the signing of the Economic Partnership Agreements (EPAs) as a bloc, while taking into consideration critical factors including industrialization, market access regulation and other global developments.

In his remarks, the Speaker, Rt Hon Daniel F. Kidega, congratulated His Excellency, Dr John Pombe Joseph Magufuli for exemplary leadership saying the United Republic of Tanzania and the EAC at large, had continued to greatly benefit.

“I congratulate you for initiating the reform agenda in this great republic which can be replicated elsewhere across the region,” he said. The Speaker termed peace and security as key components in ensuring progress and development in the region.

The Speaker further informed the President of heightened need for timely remittances of funds by the Partner States noting the Community (all Organs and Institutions) was choking in the absence of the same, and its activities and work plans hampered a great deal.

The Speaker updated President Magufuli of the progress at the Assembly as it begins the wind-down of its tenure (tenure of 3rd Assembly ends in June 2017). Salient achievements, Rt Kidega noted include, the passage of 27 Bills, many of which are undergoing assent by the EAC Heads of State, debate and approval of over 80 Reports and passage of 65 Resolutions.

One of the key deliverables, Rt Hon Kidega remarked, was a Resolution of the House promoting the use of Kiswahili and a plea for its recognition as one of the Official languages of the Community.

“We appeal to the Summit of EAC Heads of State to consider amending the EAC Treaty to make it realizable, unite East Africans and to strengthen integration”, Speaker Kidega added.